What Is An Infrared Grill – Is Hotter And Faster The Future Of Grilling?

What is an infrared grill and what does Infrared cooking mean?  Well, before we dig too deeply into the details, first consider steak and other types of meat that are grilled at steakhouses.  They definitely have a distinctive texture and taste.  I don’t think anyone would disagree with that.  In most cases, this has everything to do with the infrared (Infra-Red) technology of cooking that is being used. 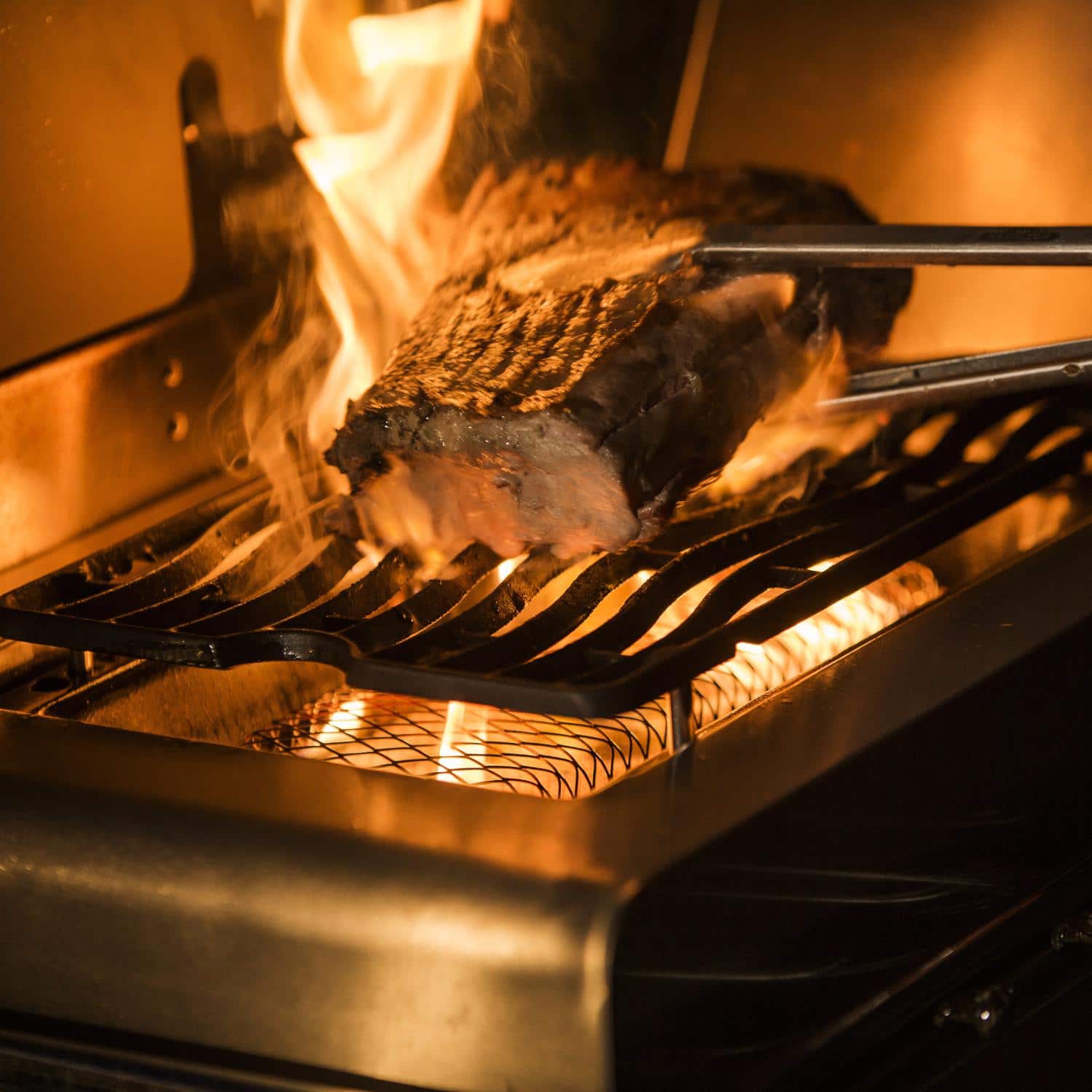 Generally, restaurants and food establishments pride themselves in cooking and serving premium meals.  This often requires grills and cooking technology that can heat up fast, cook and sear meat quickly, all while sustaining high temperatures for a significant length of time.  Fortunately, that is not a pipe dream anymore since infrared technology was innovated for that particular purpose.

The History Of Infrared-Cooking Technology

Infrared as used in cooking is now the hot buzz word in outdoor cooking vocabulary, even though most people are still unfamiliar with how it works.  The introduction of infrared cooking into the mainstream grilling society slowly started in the year 2000.  This is when the patent that had been assigned to the original infrared burner heating technology expired.  In other words, this expiry of this patent was virtually giving everyone a chance to build Infrared into their grills giving the technology a big boost.

Infrared gas grills have actually been around since the late 1970s.  A company called TEC was the first to patent a ceramic infrared burner for their grills.  Although still based on the same technology, infrared burners have come a long way since then.

Several years down the line, innovation and technological upgrades have helped introduce many new styles and brands to the infrared party helping spread the word and increase the performance of infrared cooking.  From built-in infrared sear burners, infrared side burners, to entire infrared burners throughout, the technology is popping up everywhere in almost every major brand in the gas grill industry.

What Is Infrared Grilling?

Infrared grilling is when a gas grill uses infrared burners as its main heat source or for an optional burner for cooking.  With a standard gas grill, the flames and hot air transfer heat to the cooking grates directly.

Infrared grills and burners use a solid surface emitter plate made out of stainless steel or ceramic between the flame and grates.  The gas heats this surface of the emitter plate directly, which then radiates intense heat right into the meat that is sitting on the grill grate.

Because the contained heat stops almost all airflow, there is almost no hot air circulating around your food like in a traditional gas or charcoal grill.  This hot airflow is what causes meats to dry out and lose moisture when cooking.  By cooking with infrared heat, the food retains much more moisture when cooking making for more juicy and flavorful result.  As I mentioned early, there is a reason why high-end steakhouses cook using infrared.

I read somewhere that this technology has now assumed the title of the microwave of outdoor cooking.  This is pretty funny to me because I would never, and I mean NEVER consider a microwave as a means to cooking up an expensive steak.  But when you understand how this technology works on a gas grill, you can see the benefits right away.

Things To Know When Cooking On An Infrared Grill

The main thing to keep in mind when cooking on an infrared grill or burner is that they generate intense heat.  Much higher than normal gas or electric grills can produce and they will heat up much, much faster too.  High-end infrared burners can produce surface temperature heat of 700 to 1,400 degrees Fahrenheit or higher.

This also means that infrared cooks faster and sears the outside surface of your meat quicker creating an extremely flavorful exterior.  But beware, infrared grills cook your food differently and take some getting used too.  There is definitely a slight learning curve when dealing with this type of intense heat when grilling.  Most people I have spoken to feel completely comfortable after about three cooks under their belt.

After preheating the grill on high for 5 minutes, reduce the heat by 30 percent of what you would normally use on a standard gas grill.  You are also going to reduce the cooking time by about half or even less of what you are used to.  (Note: for searing the outside, the heat can remain on high.)

The faster cooking times result in safely cooked chicken breasts in 10 minutes or less and a perfectly cooked medium rare steak in about five minutes.  How’s that for a last minute dinner solution?

Once you get the used to cooking with the higher temperatures and get the timing down, there are many benefits to cooking on an infrared gas grill.

Infrared Grills are becoming more and more common in people’s backyards nowadays.  At the same time, a large number of people are still being dissuaded by myths and erroneous beliefs surrounding this cooking technology.

One of the common myths going around is that grills equipped with Infrared technology often operate on the same principle as a microwave or a toaster.  Others think that the lack of an open flame robs the meat of the smoky taste that is often synonymous with outdoor barbeque.

These beliefs have no basis.  The difference behind an infrared grill and a charcoal or a conventional gas grill lie in the infrared burner itself.

Manufacturers design infrared burners to direct heat only on the grill grates surface as opposed to the surrounding air.  This is the same principle used by hot air dryers, which dry out food in a similar manner.  When heat is concentrated on the cooking surface only, more juice and flavor are locked into the food until you take a bite of it.

The Technology Varies But The Concept Remains The Same

The technology varies slightly across different manufacturers, although the concept is still the same.  The unifying factor here is the grill’s emitter plate.  The plate is designed to focus the flame through thousands of tiny holes, which make up the cooking surface.

What this means is that the cooking surface will evenly distribute heat throughout the surface.  As a result, uniform temperature distribution is achieved.  Technically speaking, the form of heat produced here is achieved through radiation, although most people prefer the term radiant heat because radiation tends to sounds much scarier.

But there is no need to worry when radiation is involved in an infrared grill since this is a harmless form of radiation.  Manufacturers don’t actually use plutonium or any other radioactive materials in the making of these units.

And the benefit of this kind of setup is that it produces high-temperature heat that can’t be attained by a conventional gas or charcoal grill.  This is because the intense heat generated by the infrared burners is focused on the surface through the principle mentioned above.  This focused energy is so hot that it will increase the temperature in half the time that it takes conventional gas or charcoal grills to reach those temperatures.

According to some estimates, cooking temperatures in an infrared cooking device can hit the 700 degrees F or 370 degrees C or higher mark in a span of just three to five minutes.  Consequently, this causes browning of the meat surface quickly without drying it out.

This means that food can be cooked in half the time it takes to make them ready when using charcoal grills or conventional gas grills. Remember, the less time that the steak spends inside the heat, the more the juice and flavor it will preserve.

Infrared Grills: The Concept Is Safer To Implement

Conventional grills suffer a major setback as a result of operating with an open flame.  But on the other hand, infrared grills rarely if ever release this flame.  What this means is that chances of accidental fires happening are almost zero.

What about the dreaded flare-ups?  Again, this technology proves itself to be superior since it eliminates uneven hot or cold surfaces on the grill while also ensuring that flare-ups are greatly reduced.

These benefits are undeniable.  However, at the end of the day, manufacturers continue to struggle to get this technology into the mainstream market because people are somehow not familiar with how infrared cooking works and how it can benefit their cooking in terms of taste and speed.

Using An Infrared Grill System On A Variety Of Foods

The intense heat produced can be brutal on soft fish and vegetables. However, denser meat can hold up to that intense heat without any issues.

Nevertheless, this is a challenge, which has prompted manufacturers to design and add a dedicated infrared burner to standard gas grills that allows people to taste both worlds.  All types of infrared cooking require some learning and practicing as well.  Even professionals using this technology to cook food occasionally get it wrong.

This means that you may find it challenging at first to cook the perfect steak until you get the hang of it.  But hey, this just gives you a great excuse to get out and grill more often so you can practice getting it right.

You generally only need to grill at maximum temperature for one and a half to three minutes at most before reducing the temperature.  Cooking is never done using maximum heat throughout the process.  The great thing about modern infrared grilling technology is that several brands have found a way of giving you very precise control allowing you to cook with low heat without overcooking or burning your food.  It’s all about mastering the correct configuration to get it right.

Infrared radiant heat grills cook quicker, create less exposure to dry, hot air and ultimately result in juicier meat.  For any backyard chef who is serious about their steaks, considering an infrared grill may be the way to go.  Take a cue from high-end steakhouses, and remember there is a reason why they are using this cooking system.

As always, if you or someone you know find this information on Infrared Grilling; please consider sharing it with your Grilling friends and on social media!

If you would like to leave a comment or have useful tips of your own to share on this article; what is an Infrared Grill, please do so below. We always welcome your input.