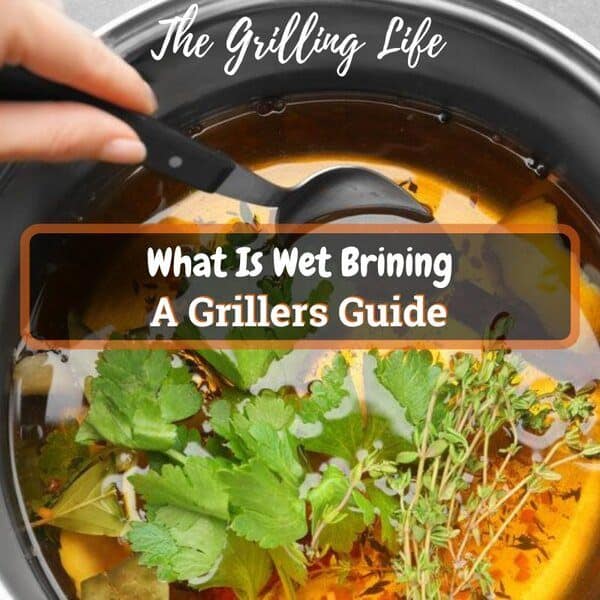 Brining is not a new concept. Curing meat is recorded throughout history, dating back thousands of years. As long as there have been curing techniques, brining has been alongside.

It was originally used to preserve meat for later consumption. Together with the benefit of preservation came a few other bonuses. Adding flavor was a big perk since a good wet brine recipe soaks salt deeply into the meat.

Now that refrigeration is so accessible, wet brining isn’t used for preservation as often. Instead, it is a culinary tool to improve the meat people are planning to cook. It is a simple process, with high-end results.

One of the most important necessities with brining is patience. It is a slow process, requiring plenty of wait time. But be assured, the end result is worth planning ahead for.

Click a topic below to be taken directly to that section. 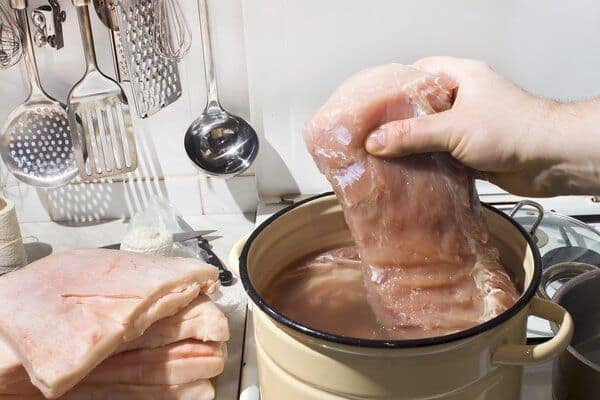 What Is Wet Brining?

Wet brining is basically the process of soaking your meat in a saltwater bath. Using a saltwater brine ratio that both extracts moisture from the piece of meat and helps the meat absorb other moisture and salt, the bath helps to deeply season the meat. So what is wet brining? It’s a culinary art to help season and perfect your meat.

What Does Brining Do to Meat?

Brining meat does several things. By placing the meat in water that has a high solution of salt (higher than the air at least) the meat’s juice and water are drawn out. At the same time, the meat continues to absorb other water, basically swapping the moisture inside.

By swapping the water, the seasonings in the brine (salt and whatever else you’d like) soak through the meat and season it to its core. 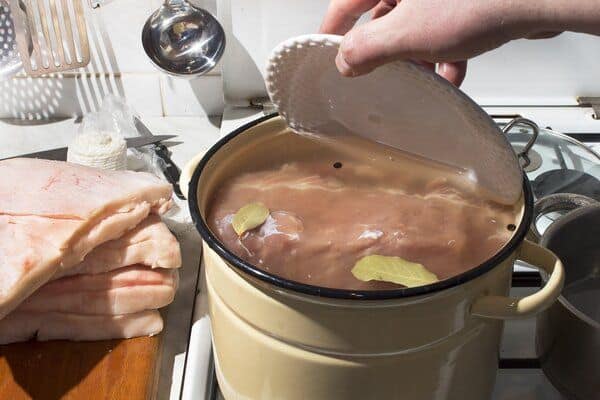 What Is Gained by Brining Meat?

Meat that has been brined gains a few characteristics. The first thing you’ll notice is immediately after brining meat, the piece of meat will have gained a bit of water weight. That is great because that can help keep the meat from drying out when it’s cooked.

If the meat still loses as much weight as usual when getting cooked, it would be left with the extra moisture it started with.

Can You Over Salt When Brining?

While you don’t want to over-salt the water, a good saltwater brine ratio has an awesome effect on the meat.

The saltwater acts as a loosening agent to the muscles within the brined meat. Think of it as a relaxer for all the muscles. When the muscles are loosened, they don’t tighten up as much during the cooking process. This is yet another way the brine helps keep meat moist. Since it isn’t tightening up so much, the moisture isn’t squeezed out of the meat, keeping it super juicy.

Beyond keeping the meat juicy, the relaxed muscles also have a nice texture. Loosened muscles tend to be less chewy and rubbery, resulting and a more tender piece of meat…nice!

Because of the soaking process, the seasoning you put into your brine absorbs throughout the meat. It is a much better season compared to a basic surface seasoning. You can be sure it will be seasoned evenly as well since there aren’t any nooks or crannies that water won’t find.

Brining is great because it works with slow-cooked meats or meats for stews as well. There isn’t much point in surface seasoning a chicken breast that is going into a slow cooker since it will be washed right off. By brining the breast first, it gets the seasoning throughout the meat, and won’t be rinsed away so easily.

Wet brining recipes are great because they are so versatile. The basic brining recipe is based on using about 1 cup of salt for every gallon of water necessary to completely submerge your meat.

In honor of Thanksgiving, here is an easy Turkey brine recipe that produces a lot of flavors: Easy Turkey Brine Recipe 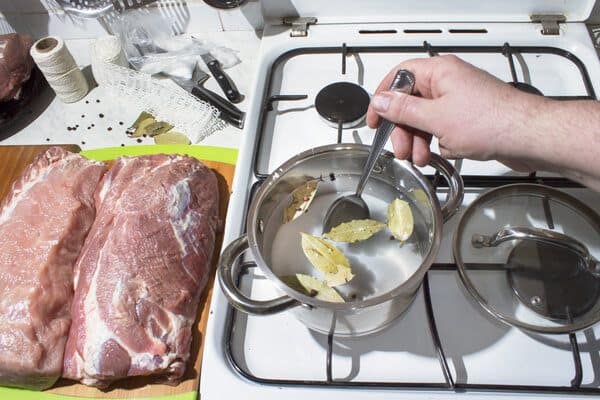 Be Creative When Brining

There is a reason why wet brine recipes are so versatile. That is because any seasoning that can be dissolved or is small enough to enter the meat will be absorbed into the meat you are soaking.

It is a great way to be creative with your cooking. Make sure to keep the salt as the main seasoning though. It is the only essential ingredient (besides water) in the process.

If you are going to brine a small amount of meat, say a few chicken breasts, it is possible to do it in a Ziploc bag. I still recommend placing the bag in a bowl or other large pot to make sure any leaked water is contained.

Once you have the water seasoned and cooled, you can place your meat in.

It is possible to soak your meat too long, so don’t push it too far, lest the meat turns mushy and unappetizing.

A word to the wise, I always wet-brine my food in the fridge. It isn’t worth the risk of bacteria growing in my food to leave it out on the counter. I know it can be a pain to fit something so large in the refrigerator, but it is well worth the annoyance to avoid excess bacteria. A hospital trip should not be a part of the process.

When your meat is done soaking, pull it out and pat it dry with a paper towel. If you have time, let the meat sit on a plate in the refrigerator for an hour or so to let it air dry further. The wet surface can slow the meat from browning, so drying it will add even better texture in the long run.

The brining process can easily take a full day, but luckily most of it is very hands-off. If you don’t have much time, pat drying the meat instead of letting it air dry should be the first item you trim off.

Try not to shorten the time in the brine too much. It takes quite a while to soak all the way through a piece of meat, especially larger pieces. It is well worth the patience as well. Starting the day before is a wonderful way to ensure you are getting the best amount of time possible in the brine.

Final Thoughts on Our What Is Wet Brining Guide

To finish off, here is a quick recap.

What is wet brining? An awesome technique to make your meat juicier, tastier, and give it a great texture.

This simple technique is well worth the extra time, and the patience necessary. After you learn your favorite seasonings, wet brining will be a must for any meat in your household.

As always, if you or someone you know find this information in our what is wet brining guide helpful; please consider sharing it with your grilling friends and on social media.

If you would like to leave a comment or have useful tips of your own to share on how to wet brine meat, please do so below. We always welcome your input. 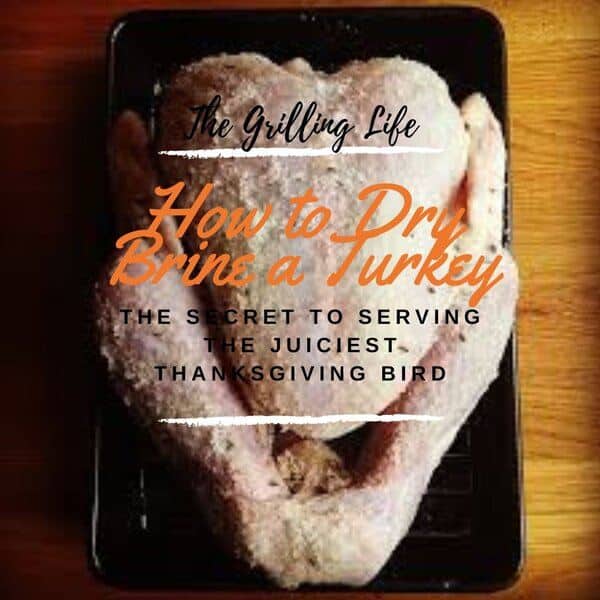 How to Dry Brine a Turkey This Thanksgiving 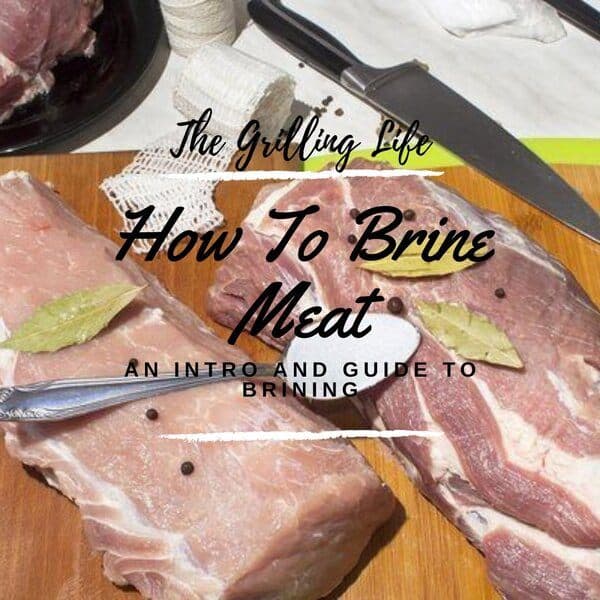 How to Brine Meat – An Intro and Guide to Brining 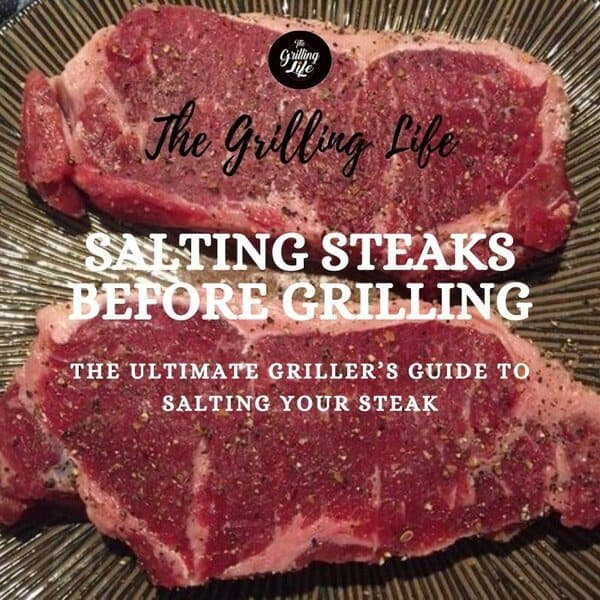 Disclosure – At The Grilling Life, I am committed to researching and writing thoughtful, informative and editorially independent reviews of the best products for your outdoor cooking needs.  If you like what I do, you can support me through my chosen links, which earn me a commission.  This allows me to continue sharing with you my love for all things barbecue.  Your support is truly appreciated.

Learn More About Salting Your Meat