If you are looking to expand your kitchen to include the great outdoors, and you value a modern, stylish appearance as much as a quality build and an excellent reputation, then the Napoleon Built-In LEX 485 Grill Head gas grill deserves a long look.

Charcoal grillers are generally incredibly reluctant to prepare their barbecue on any electric or gas grill. To many, the very suggestion of doing so is blasphemy. Yes, charcoal grillers are a stubborn bunch, but you can’t really blame them. Even the most ardent supporter of gas or electric grilling must admit that charcoal grills, for all their inconveniences, produce mouth-watering ribs, hot dogs, and burgers, among other delectable barbecue foods.

If there is one gas grill that has the power to sway charcoal devotees, it is the Napoleon Built-In LEX 485 Grill Head. While it offers the performance and convenience of a traditional gas grill, it can be fitted with a charcoal tray to give your food that unmistakable smoky flavor. It gives you the experience of charcoal grilling with a fraction of the effort.

The Napoleon Mirage 485 grill boasts a total cooking area of 675 inches, which is spread out over four burners. These four burners allow you to prepare multiple dishes at a time. This means you no longer have to worry about the burgers going cold while you grill the hot dogs. These burners can produce an immense amount of heat. This allows you to decorate your food with the beautiful sear marks which take grilling from another method of preparing food and turn it into an art form.

Napoleon also manufactures a smoker tube, which can be added to the Built-In LEX 485 to let you experiment with different recipes and techniques.

Lighting an electric grill can be a surprisingly tedious task. It can get pretty embarrassing to be standing there, pressing the ignition button again and again only to have the flame appear for a moment before retreating. The last thing any griller wants is for their friends – not to mention in-laws – to see them struggling to ignite a grill in this manner.

With the LEX 485, such moments of extinguished dejection can be easily avoided. This grill head features Napoleon’s trademark JETFIRE technology, which combats stubborn grills. Through the JETFIRE system, a powerful flame is shot through the burners the moment you fire them up, making sure they light – and stay lit – every time.

Not only is the Napoleon Built-In LEX 485 Grill Head incredibly effective when it comes to grilling meat, but it also looks awesome. In many ways, it looks like the kind of grill you would expect to see in the kitchen of one of those spaceships in Star Trek. 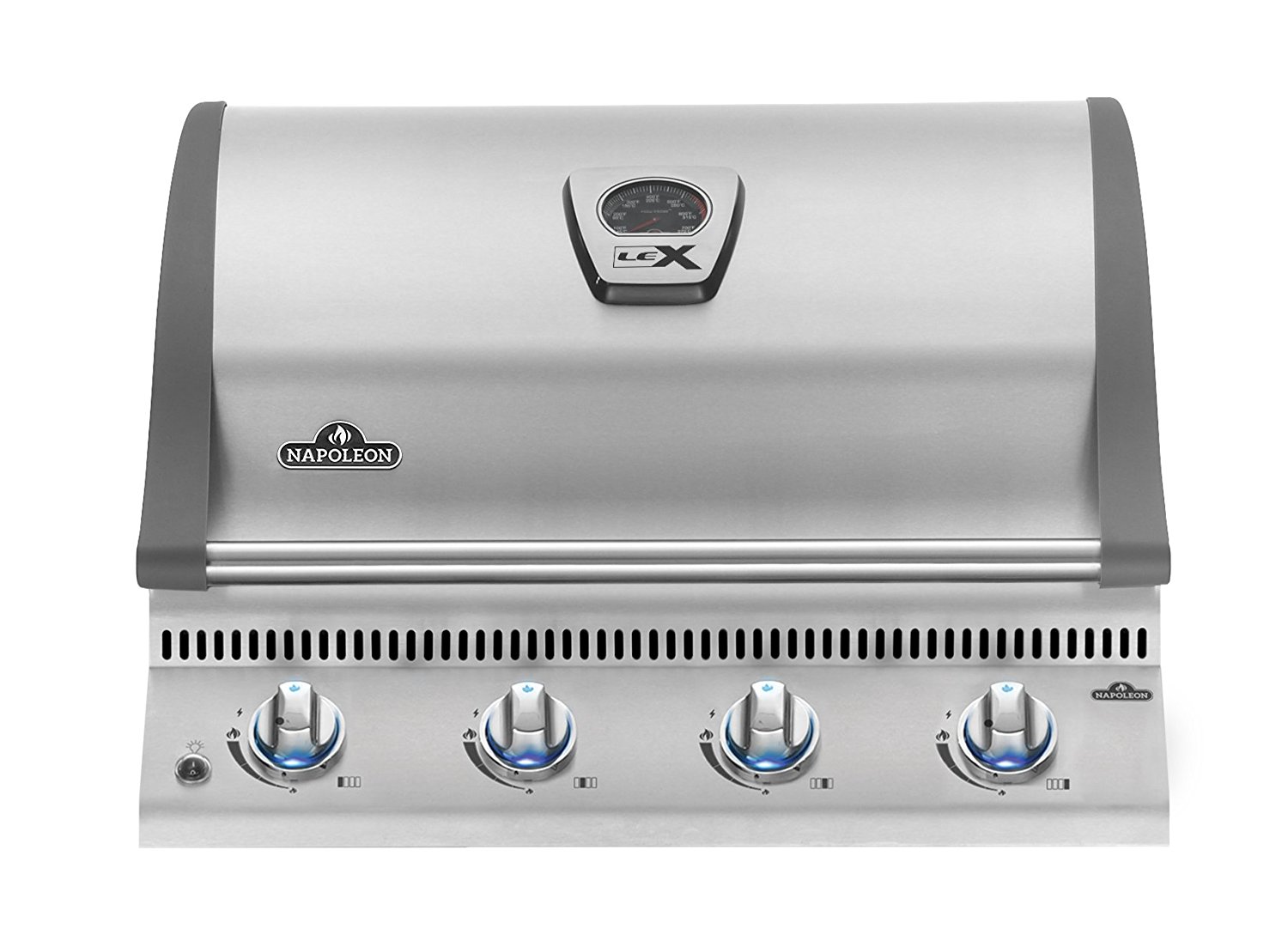 The control knobs on this grill boast i-GLOW backlit technology. The i-Glow technology illuminates them in an incredibly looking bright blue light. This is a pretty nifty feature regardless of when you choose to grill. It is particularly impressive during the darker hours. If you are planning to hold barbecues during those long summer evenings, the Napoleon Built-In LEX 485 Grill Head might just be the grill for you.

Buying a grill is exciting, and using that grill for the first time is even more exciting. Unfortunately, those moments of euphoric exhilaration are broken up by the often-tedious task of assembling your grill for use.

Most grills are a real pain in the neck to get up and running. They come in multiple pieces and with multiple nuts and bolts. The accompanying instructions rarely make it clear which nut should be placed into which piece of the grill. This can result in a great deal of confusion as you try to assemble your grill. This can leave you with something not unlike Homer Simpson’s ill-fated grill-cum-outsider-art-piece.

Thankfully, the Napoleon Built-In LEX 485 comes pretty much already assembled. There are some minor parts which you will have to put together yourself, but they are backed by easy-to-follow instructions. All in all, you will be able to fully assemble this grill in less than an hour, leaving you with plenty of time to prepare a barbecue banquet in celebration of your new purchase.

When the team at Napoleon began putting plans together for the Built-In LEX 485 Grill Head, they had the user in mind. Often times this cannot be said of the design teams of some other mainstream barbecue brands.

This grill features an ergonomic design and offers a plethora of features to make even the most basic of grilling related tasks easier than ever before. Take, for example, the one-touch ignition that we covered earlier on; or the i-GLOW backlit technology, which makes it easier (and cooler) to grill late into the night. The dedication with which the Napoleon Built-In LEX 485 was designed can even be seen in its seemingly basic lid. This grill head is equipped with a Lift Ease Roll Top lid, which can be lifted and lowered with just one hand in a matter of seconds. It is composed of stainless steel, so you won’t have to worry about rust developing and destroying the ease with which the grill can be operated.

The Napoleon Built-In LEX 485 has its staunch supporters and ardent detractors, but you can count on being among the former. I believe this grill makes for a great purchase. Whether you are a barbecue newbie looking for a stylish grill to start out with, or an expert griller looking to experiment with some new equipment, the Napoleon Built-In LEX 485 Grill Head is a top notch choice.

This grill boasts a variety of handy features which make it a joy to use. Features such as a one-touch ignition system and the i-GLOW backlit technology that makes it stand out from other grills on the market.

CHECK THE PRICE ON AMAZON
As always, if you or someone you know is interested in this Napoleon Built-In LEX 485 Grill Head Review or you find this information useful, please consider sharing it with your Grilling friends and on social media!

If you would like to leave a comment or have a review of your own to share on the Napoleon Built-In LEX 485 Grill Head Gas Grill, please do so below. We always welcome your input.