The pros, the cons, and the facts about the Cookshack Fast Eddy’s PG500 wood pellet grill.

Even if you’ve never used or even ever heard of the Fast Eddy’s Cookshack PG500 pellet grill, you’re probably more aware of its origins than you know.  The Fast Eddy’s grill is the result of a collaborative design between the Cookshack Company, which operates out of Oklahoma in the good ol’ U S of A, and “Fast Eddy” Maurin, a well-known grill master among the competition circuit.  You have to respect a grill that’s designed, even in part, by someone who knows his way around creating award-winning competition barbecue.  Who else can you trust if you can’t trust the pros? 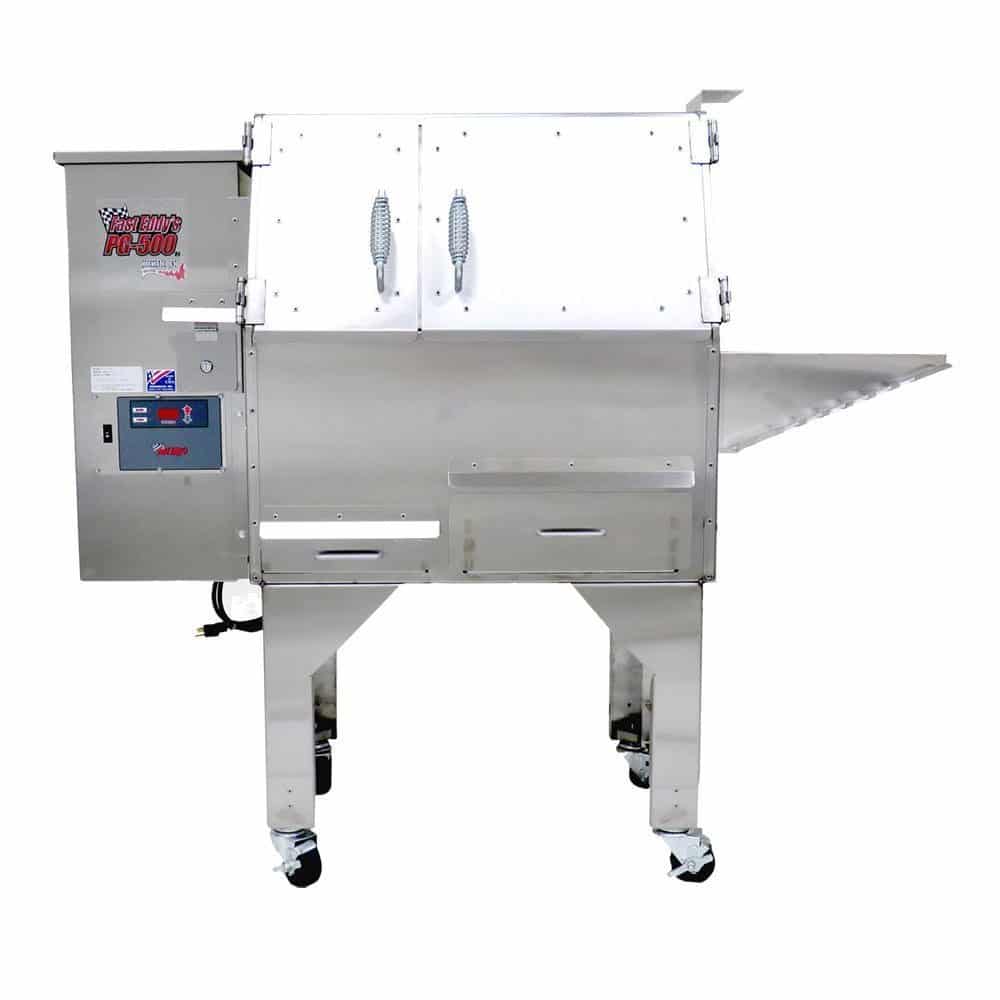 You can immediately tell that this Cookshack pellet grill is unlike its competitors.  The entire setup is switched around.  It flips the script.  Specifically, it addresses the limitations of outdoor convection systems that occur in most pellet grills, which eliminates the possibility of ever cooking over two zones.  We’ll talk about that more in a minute.

Suffice it to say that Fast Eddy’s grill offers up four—that’s four—cooking zones, each one distinct.  I’ll cover the specifics of these zones below.  For now just know that this really amps up the versatility of this unit, not to mention the potential.  Have you ever even imagined a four-zone grill that runs on wood pellets?  Yeah, me either.

If you looking for a relatively large capacity pellet grill with a big focus on its smoking ability, there are a lot of benefits to be had with the Cookshack PG500.  Cookshack wood fire pellet grills come highly regarded, and Fast Eddy Maurin is a true legend.  There’s a reason for both, especially when you consider the many years of work and innovative features that went into designing these grills.

Some of the benefits to consider are… 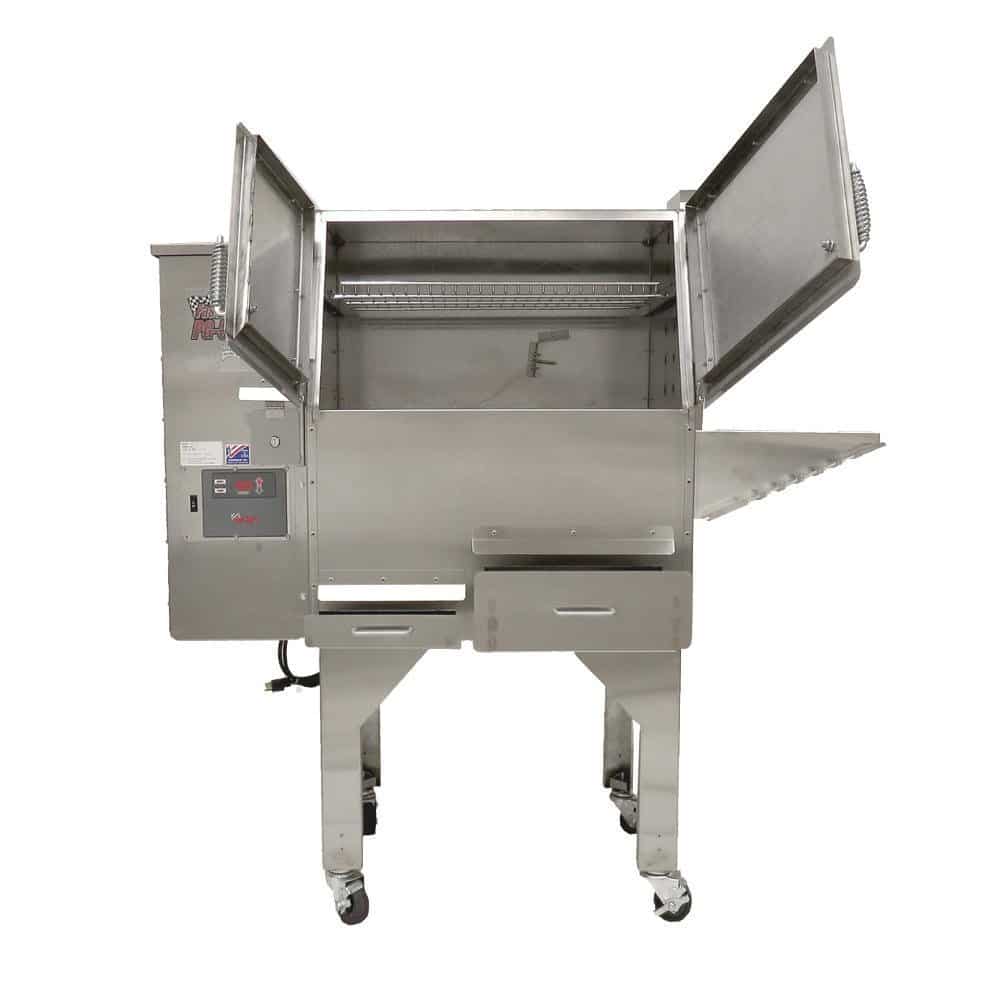 Its versatility is the main benefit of the Cookshack PG500 Pellet Grill.  It’s true that, by their very nature, most pellet grills do double-duty as convection ovens.  That’s partly due to the fan system, but mainly the result of the traditional construction of most wood-fired models

In the majority of pellet grills, the firepot is located at the very bottom of the grill, below the diffuser plate and fan system, with the grate on the very top.  That’s where the Fast Eddy’s line of Cookshack pellet grills stand apart: the firepot is right below the cooking grate, so the flames actually touch your food when cooked directly over it.

As a result, the area to the right of the firepot is in an entirely different cooking zone (indirect zone), as are the two zones in the top grating. The one directly above the firepot gets slightly hotter than the one to the right.

You do still get a convection effect. The difference is that it comes from the hot air flow at the top, not the bottom. It occurs on the indirect side of the firepot, as well.  That’s something to keep in mind as you use the top grates and what makes this grill so ideal for low-temperature smoking.

That doesn’t even count the 19” x 13” x 4” warming drawer, but that’s beside the point.  The point is that thanks to the size of the cooking surface, Cookshack claims that you can cook an entire turkey on your Fast Eddy’s grill, which is a Thanksgiving game-changer for sure.

A Simple And Easy To Use Digital Controller

The digital controller is easy to use and has some nice features that improve performance for slow and low cooking and again for searing.

You can control the temperature more than you might expect thanks to the digital panel on the front of the grill.  You can modify the controller program for both low temperatures and for searing to really master the results, you want.

Once you set the electronic thermostat, the grill starts automatically.  You can then fiddle with the controls for the draft fan to figure out the level that works for you.

A Warming Drawer To Keep Your Food Warm

One unique feature included in the Fast Eddy’s pellet grill is a front access warming drawer.  The warming drawer has two useful functions.  You can place your finished food inside to keep it warm until you are ready to eat, or you can use it to cold smoke foods like cheese.  I don’t know about you but smoked cheese is one of my favorites.

A Convenient Ash And Grease Clean Out System

There is a front-mounted ash and grease drawer that really make cleanout easy.  Just pull it out and empty the drawer between uses and you are done. 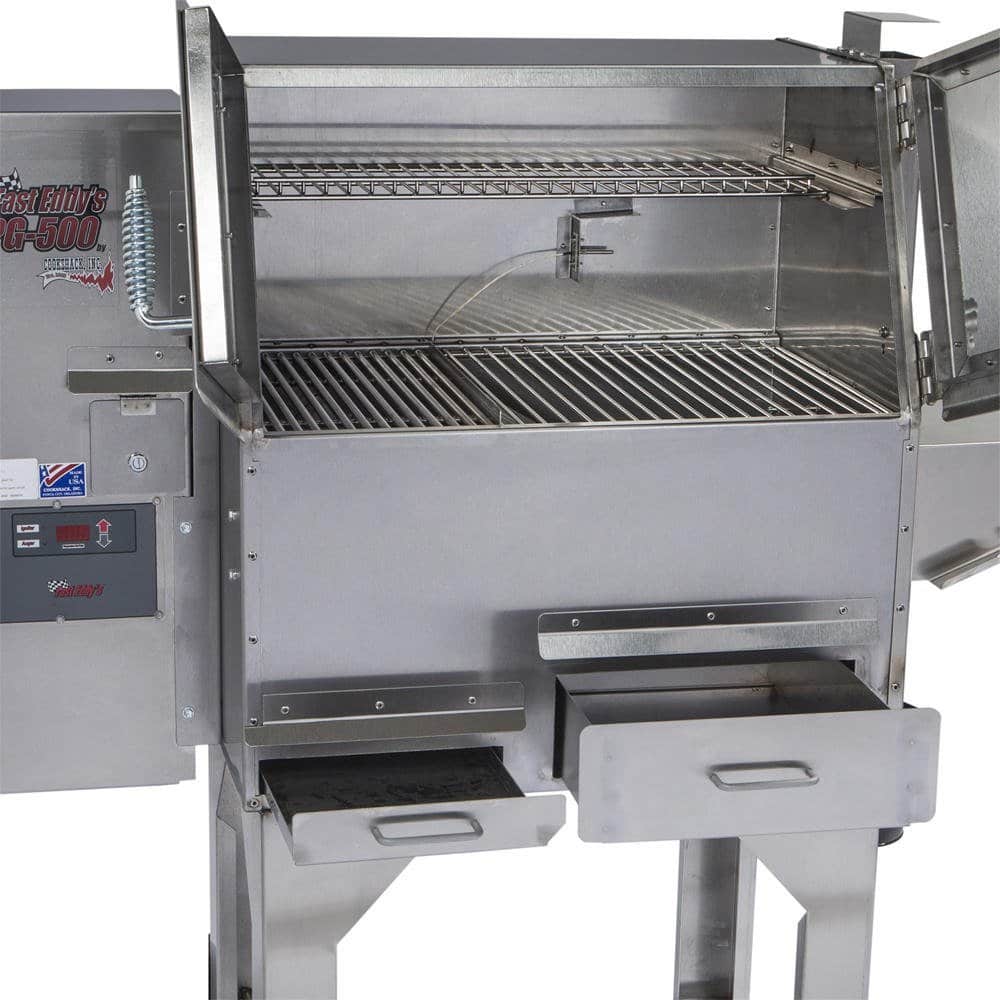 Cooking with the Fast Eddy’s Cookshack PG500 grill is a delight, in part because it’s effortless. First, fill up the 22-pound hopper, which is mounted on the side of the boxy grill.  By all accounts, the Fast Eddy burns through 1.2 to 2 pounds an hour at a temperature of 400 degrees Fahrenheit.  Use that as a guide.

As one Amazon reviewer said: “The PG500 uses a lot of pellets to achieve the great bark it produces but that’s a feature, not a bug.  To get good smoke you gotta burn some wood.”

Next, all you need to do is set the temperature you want on the control panel.  As mentioned, this electric grill starts up automatically from the control panel.  You can go up to 600 degrees Fahrenheit, but you can just as easily program the grill for a low, slow cook over a longer period of time.

The line of Fast Eddy Cookshack smokers has an array of outstanding and innovative features.  Several of their features was the first of its kind for pellet grills (although widely adopted by other manufacturers now a day).

Peek at the Amazon page and you’ll find many five star reviews.  Before letting the price put you off or make you hesitate, take a look at the amount of value you get for that money.

Stainless Steel Construction Inside And Out

The Cookshack Fast Eddy’s 30-Inch Pellet Grill has a riveted body assembly and is constructed entirely out of stainless steel for a durable and long-lasting build.  The material and design do a great job in helping to retain heat, making for better temperature control.

Like I mentioned earlier, the Fast Eddy’s Cookshack features four unique cooking areas, or “zones” and each has a separate purpose.

Zone one is the direct cooking area and is located right over the firepot and open flame.  When you cook in this zone, the flames can lick your food for that fire-kissed sear.  This zone’s cooking area is 10″ wide x 18″ deep.

Zone two, or the indirect zone is just to the right of the firepot.  This is where you would roast or bake your food with smoke or without.  Zone two’s cooking area is 18″ x 18″.

One of the Fast Eddy’s Cookshack PG500’s most unique features is, of course, the positioning of the firepot.  It’s rare for the flames to touch your food unless you’re cooking directly over an open fire—but then unlike many pellet fueled cookers, this grill allows you to do just that.

The ability to cook over an open fire to sear your food on a pellet grill is a game changer.  The flavor and the caramelized texture will keep you cooking on pellet grills for the rest of forever.

The control panel’s ease-of-use gets five stars.  It takes most of the guessing out of choosing the temperature you want.  Its versatility is a point in its favor, as well.  Most pellet grills make excellent smokers, as well, but it’s helpful when your grill works with you to eliminate extreme heat fluctuations.

The technically advanced temperature gauge and automated digital controller eliminates extreme heat fluctuations, which is the main culprit for overdone and dried out food.  Just sit back and let the technology do its work.

The direct cooking grate is made from 304-stainless steel so it won’t rust or deteriorate even with hard use.  The secondary cooking shelf is nickel plated and robust.

The hopper can hold up to 22 pounds of pellets at a time that all but eliminates the need to refill it even during the longest slow and low cooks.

A Side Shelf And 4 Wheel Casters

There are 4 heavy-duty locking wheel casters for easy mobility and one side shelve built onto the side. 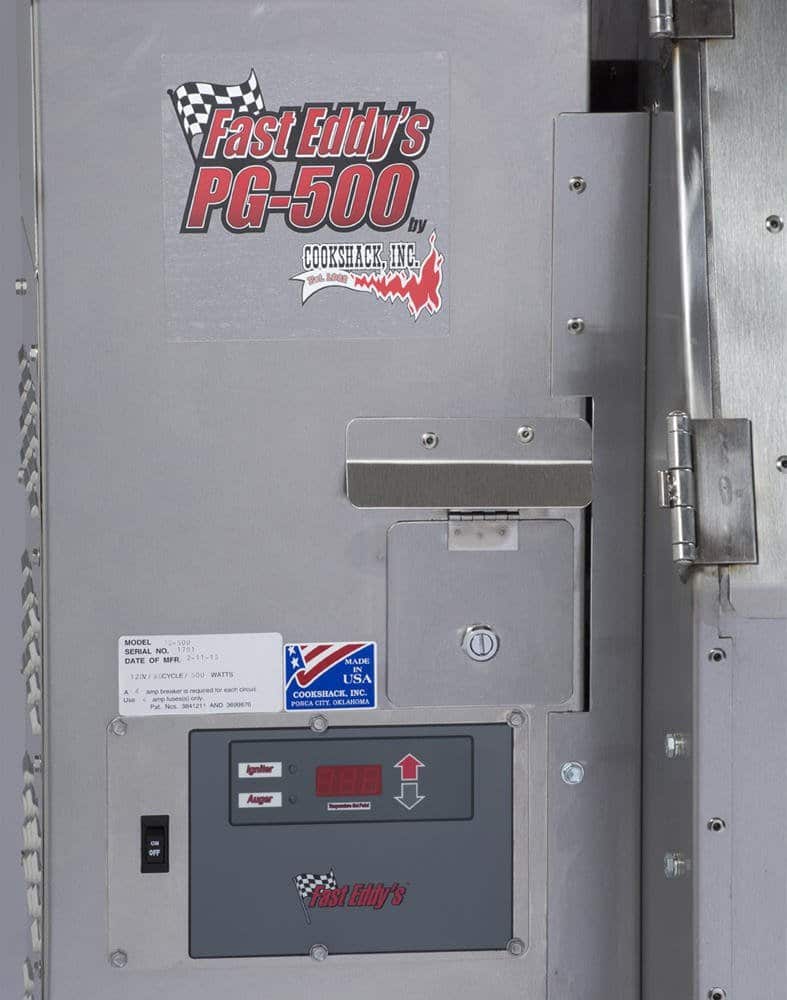 Who Is The Cookshack PG500 For?

If you’re an accomplished griller, love wood-cooked food, and have the money to spare, the Fast Eddy’s Cookshack PG500 may be the perfect pick. You don’t need to be an absolute grill master, though.  It will help if you are somewhat skilled, patient, and willing to learn, or else this bad boy might overpower you.

Owing to the price, the Fast Eddy Cookshack PG500 may not be for amateurs.  You don’t want to blow a wad of cash that big if you’re unfamiliar with pellet cooking.  In size and ability, the PG500 is not just impressive, but also potentially intimidating.  Start smaller or with something less expensive if this isn’t in your wheelhouse or your budget.

These high quality and well-built machines are made in the USA.  They come with a 2-year limited warranty.  Cookshack is very well respected and is known for excellent customer service. 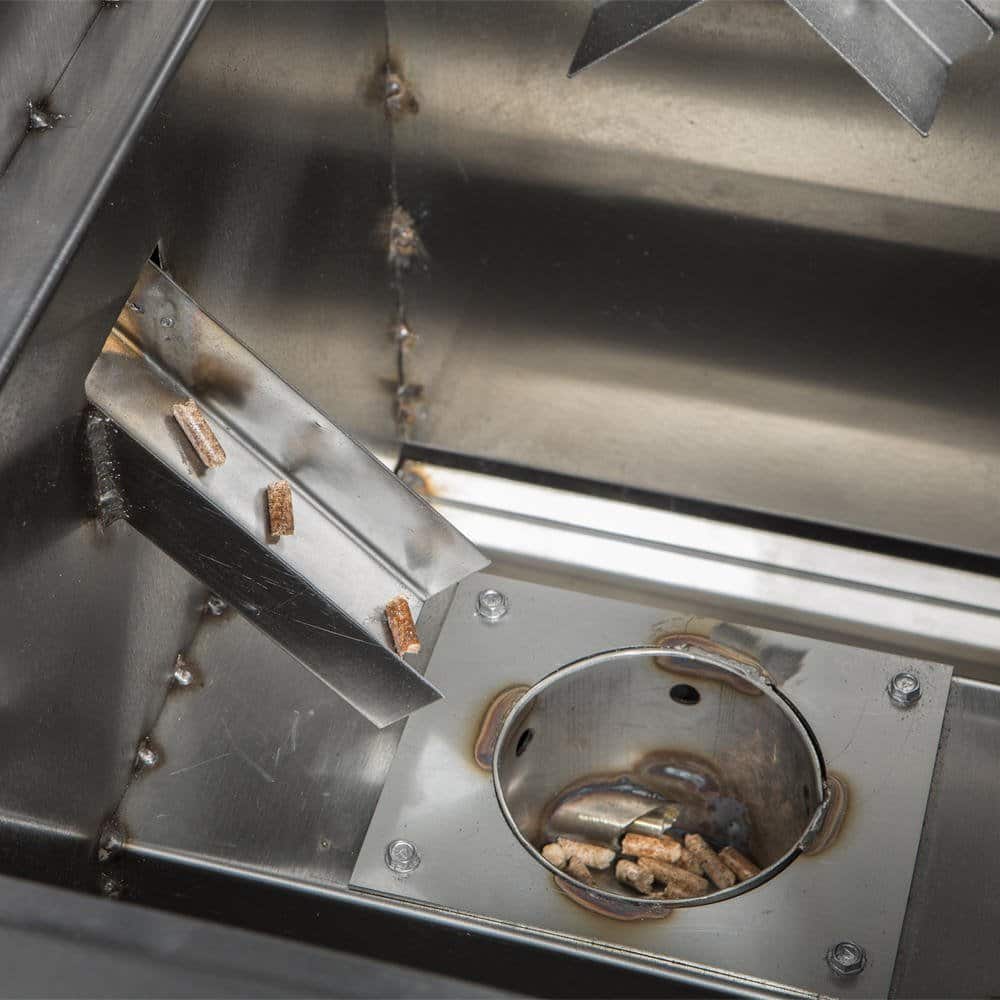 This Cookshack pellet grill comes with a lot of star power owing to the calibration with “Fast Eddy” Maurin.  In my opinion, it lives up to every aspect of it.  This cooker does an amazing job controlling heat and can produce award-winning results.  The build is surprisingly high quality for the price and the design is almost perfect.

My only nitpick is that there is no way to cover the firepot when not grilling over it directly.  This allows ash to sometimes blow around in the cooking chamber.  This is not much different from cooking with a charcoal grill and is far from a deal killer.  I just wanted to point it out.

The bottom line is that I’ve yet to meet any owners who did not absolutely love their Cookshack grills.  You undeniably get everything you pay for and then some.

If you would like to leave a comment or have a review of your own to share on the Cookshack PG500 Pellet Grill, please do so below.  We always welcome your input and I would love to hear about your experiences with it.

At The Grilling Life, I am committed to researching and writing thoughtful, informative and editorially independent reviews of the best products for your outdoor cooking needs.  If you like what I do, you can support me through my chosen links, which earn me a commission.  This allows me to continue sharing with you my love for all things barbecue.  Your support is truly appreciated