GDEALER Instant Read Thermometer Review And Rating – Made With The Griller In Mind! 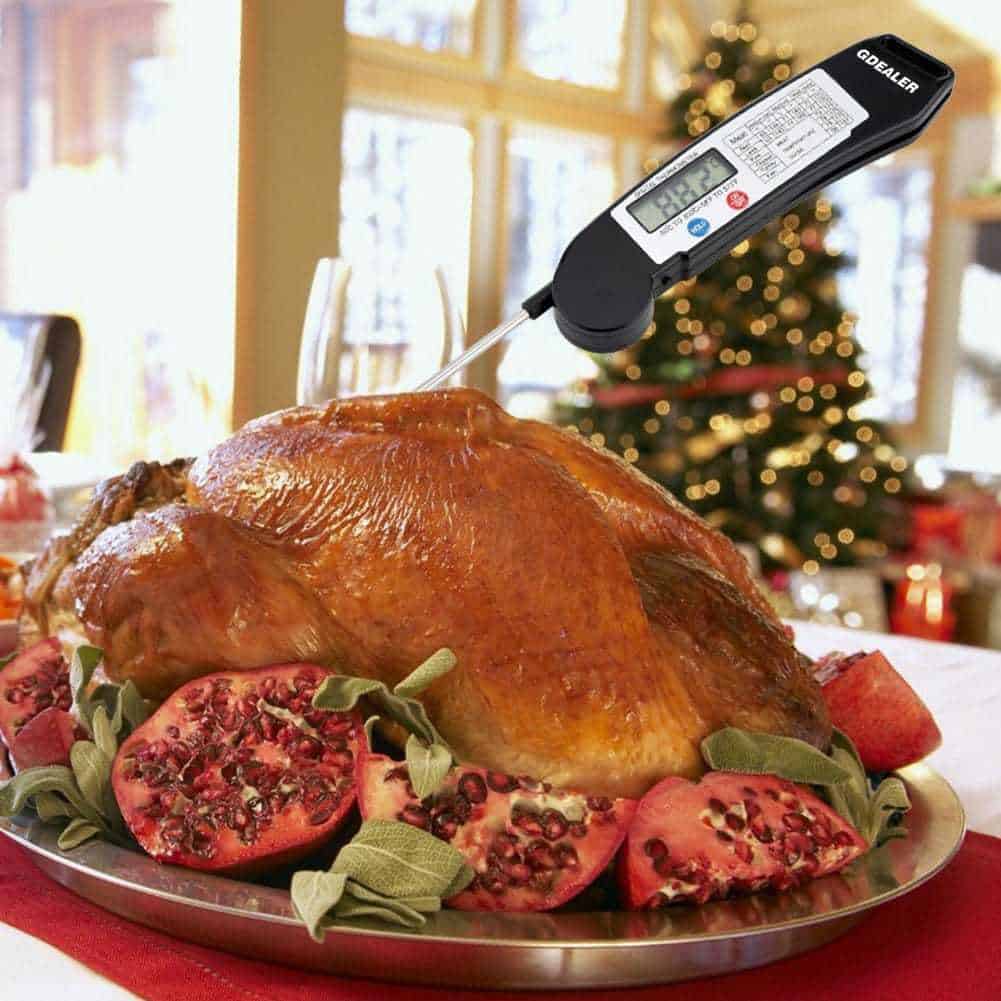 With a simple design and easy usability, this thermometer offers the speed and accuracy to come close to matching thermometers more than three times its price range.  It is also a #1 Best Seller on Amazon making it one of the most used food thermometers out there.

Made By: Global Dealer (GDEALER)

The GDEALER comes with a detailed meat temperature chart printed on the front of the thermometer so you can easily see the best temperatures for safety and food doneness.  It offers a wide temperature range of -58°F to 572°F, making this more than a one trick pony.  Its temperature versatility allows you to use it on anything from checking below freezing temperatures to deep-frying.

Another great feature, GDEALER offers a 100% money back lifetime guarantee, which is a huge plus when searching for an addition to your cooking arsenal that you are hoping will last.  The GDEALER instant read thermometer also has an auto-off feature, which is great if you forget to turn the thermometer off most of the time like me.  After 10 minutes of non-use, the thermometer will automatically shut off to save battery life.

The GDEALER thermometer has a quick temperature readout time of 4-6 seconds for meats and a temperature hold button for easy viewing.  Unfortunately, it’s 4-20 second readout time for liquid is a little underwhelming.  A definite drawback for you beer or wine brewers out there. 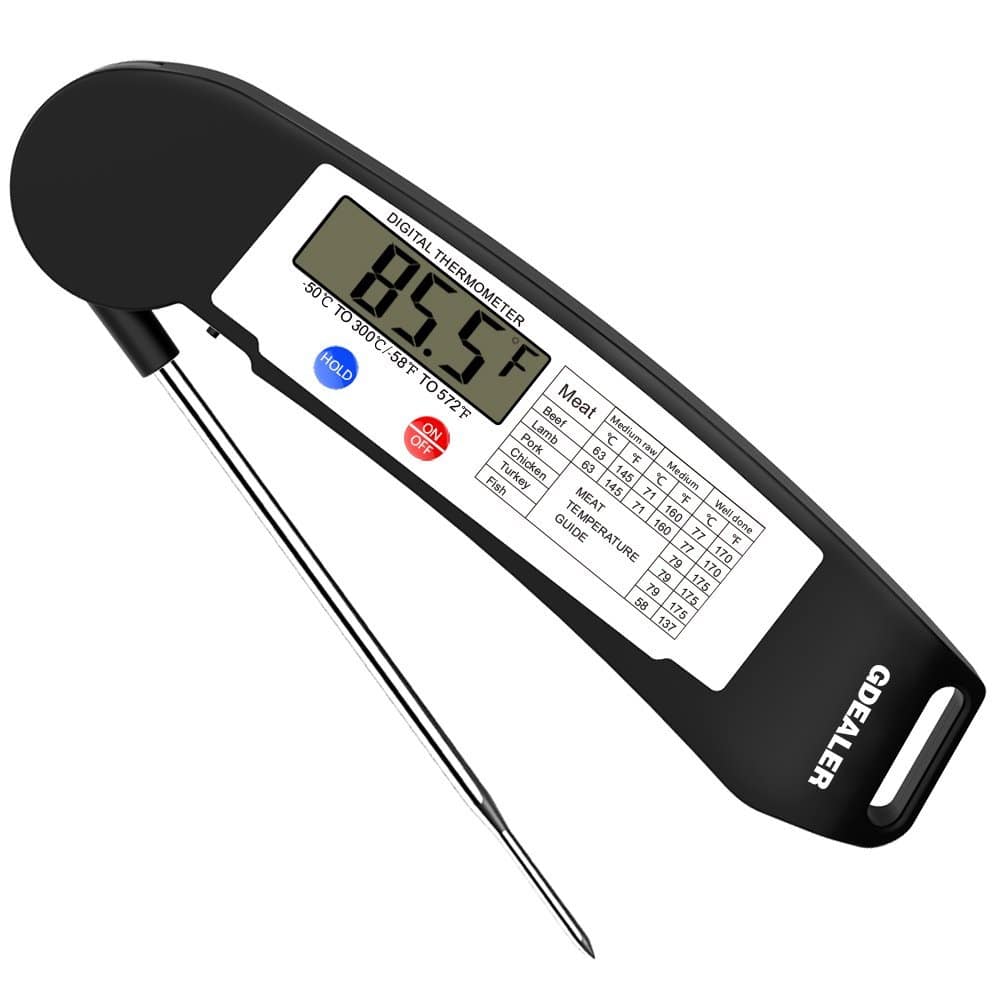 A Guide To Using The GDEALER Instant Read Thermometer

As with most instant read thermometers worth their salt, the GDEALER is simple to use and requires little to no setup.  Simply press the on/off button located on the front.  You won’t see the temperature on the screen until you flip open the probe.  At that point, it will automatically start reading the temperature.  There is a switch under the battery cover where you can choose between Celsius and Fahrenheit depending on your preference.

After that just insert the probe into the center of your food, making sure it is as close to the middle of the thickest section as possible.  This will give you the most accurate temperature reading of the food.  Within four to six seconds, the thermometer will display the temperature of the food on its screen.

If you leave the thermometer powered on, it will automatically shut off after 10 minutes of non-use, which is a great way to prolong the battery.  Other than that, just remember to wipe clean the probe after every use to prevent harmful bacteria from contaminating whatever you check next.

The GDEALER Thermometer Description And Features

The GDEALER is a palm-sized thermometer with a collapsible internal probe that folds nicely into the body making it easy to carry in a pocket or store in the kitchen.  Its casing is made out of plastic and has an 11cm (4.5″) long stainless tapered probe. 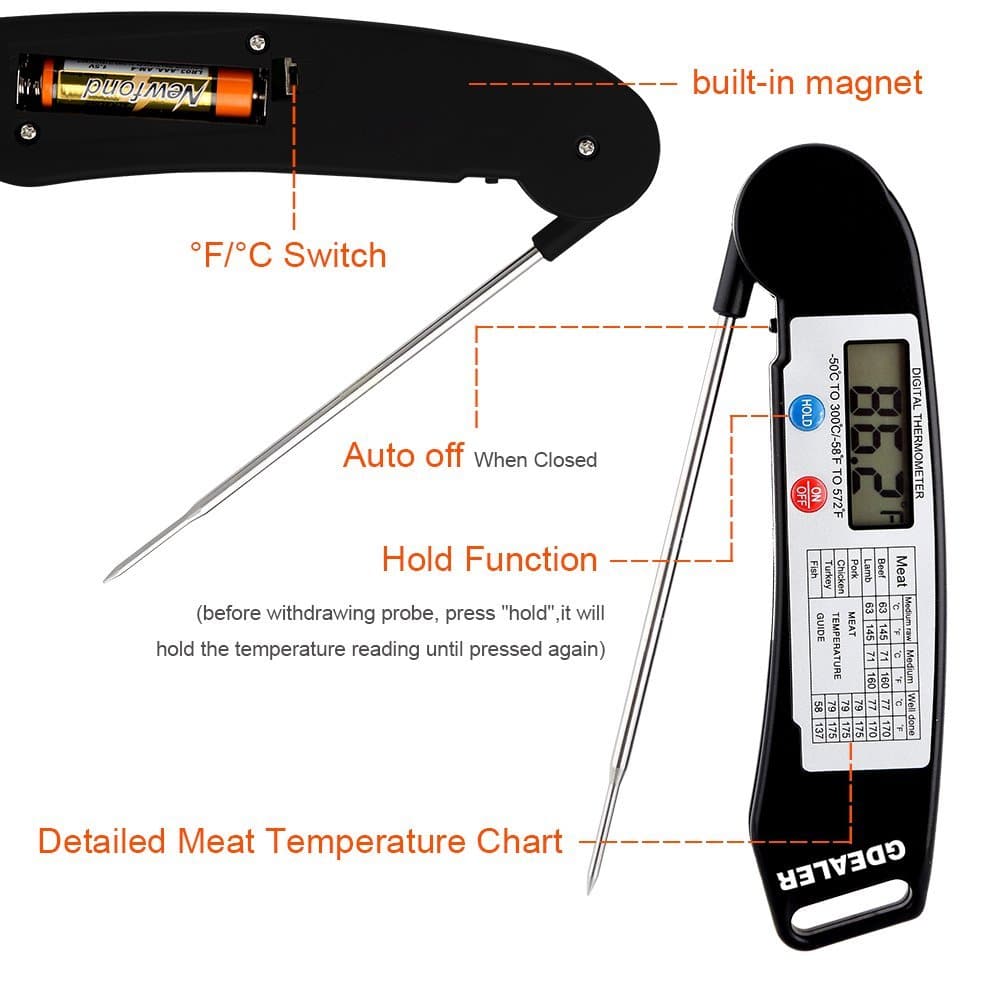 The read time for this thermometer it is not the fastest I have ever seen, but it is nothing to scoff at either.  The GDEALER will give you a temperature readout in only four to six seconds for meat.  That is pretty quick in the instant read thermometer realm.  Anytime you can get your hands away from the heat source as quickly as that is a big plus as I am sure you will agree.

One of the few downsides is that it takes four to twenty seconds to read liquid and I would count on it being closer to the twenty-second mark more often than not from the tests I have seen.   Still, if all you are looking to use it for is grilled meat, this won’t be a deal killer.

Another great feature that receives high marks for the GDEALER Thermometer is the accuracy of the temperature readouts.  I mean, isn’t this the reason we go out and buy a cooking and grilling thermometer in the first place?  I don’t know about you, but when I overcook or undercook my grilled creations, it frustrates me to no end. The GDEALER thermometer reads the temps within ±1°F of accuracy (between -4F to 392F), which is darn close to perfect.  If you need something more accurate than that, expect to open your wallet a little wider.

The hold button is one of the handiest features on this thermometer.  It gives you the option to freeze the temperature on the display until you have read it.  This is great for checking weird angles or lower light conditions.  After four to six seconds, just press the hold button and the temperature will hold on the display until you press the button again.

The 4.5” foldable probe rotates out 180-degrees and is perfect for keeping your hand a safe distance from the heat source.   This is another handy feature while checking the temperature, so you won’t be burned.  The probe folds back in against the base also for smaller storage when you are done.

The folks at GDEALER added a smart design feature that will Auto-shut off the thermometer after 10 minutes idle time to save battery life.  The automatic power on/off switch is a great addition too.  The thermometer turns on when you pull open the probe and turns off when you return the probe to the closed position.  GDEALER really wants you to save money on batteries apparently.

The large and clear LCD display screen shows readouts that fill the entire screen making it quite easy to read.  Unfortunately, this model does not come with an option for lighting up the readouts in low light conditions.

Displayed on the front of the thermometer is a guide for ideal meat cooking temperatures.  This shows the FDA’s recommended temperatures for beef, lamb, pork, steak, chicken, turkey or fish.  Now it’s easy to check for temperatures, instead of having to run into the house to check on google!

The GDEALER grilling and cooking thermometer is powered by one AAA battery that comes included.  I don’t know about you but I personally hate having to deal with those small round button batteries that most thermometers use.

Easily change from ℉/℃ depending on your preference. 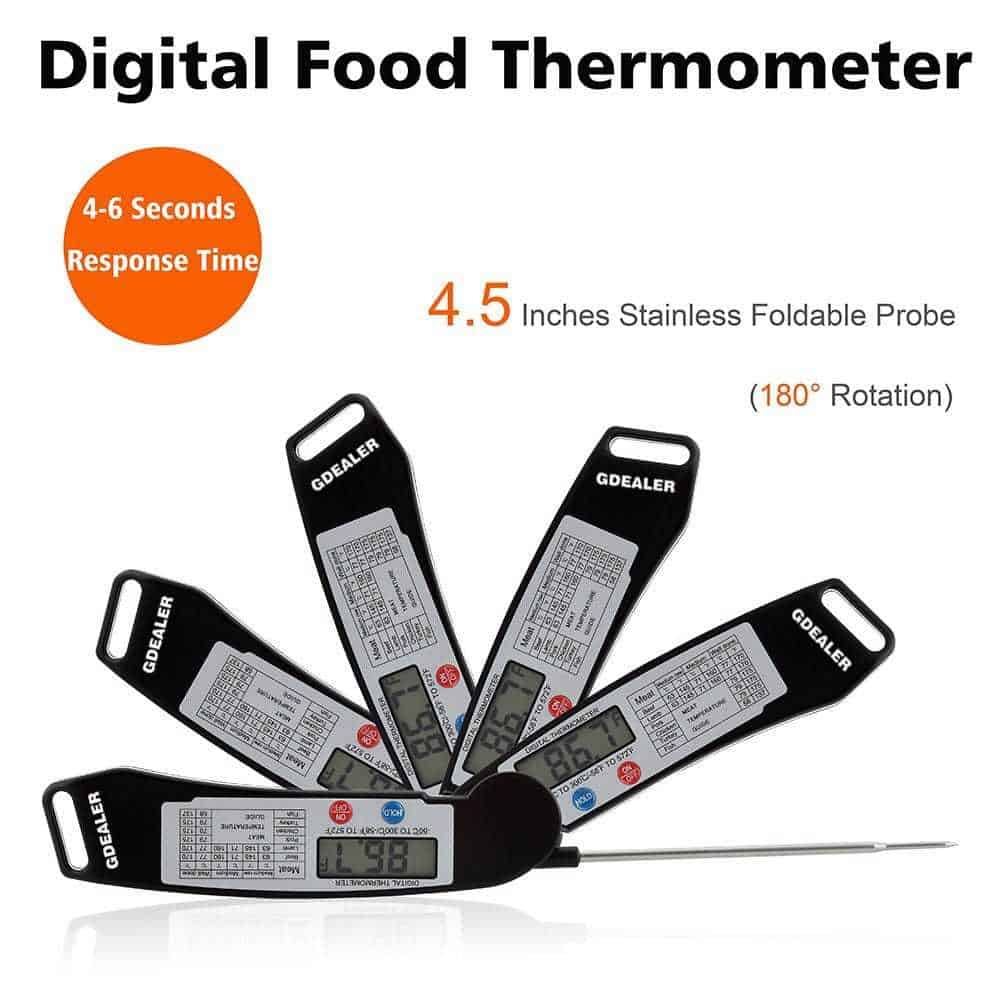 Who Is The GDEALER Instant Read Thermometer For?

The GDEALERS instant read thermometer works well for the experienced cook or for people who are new to the kitchen.  However, I would have to say it works best specifically for grilling and the temperature checking of meats.

The auto power switch and the hold feature make it a handy product for both beginner and more experienced cooks.  If you are someone that has to continuously look up the safe temperatures to cook your food too, this may be a good thermometer for you.

Who Should Not Get It

If you are someone that needs to monitor the temperatures of liquids often, there are better choices out there for you.  If you are a griller who likes to slow cook your meat, a better option probably is a wireless remote leave in thermometer.  Most of these types of thermometers offer multiple probes that let you read several temperatures at once.  This is perfect for following the temperature of your food, or multiple foods and your grill at the same time.  All from the comfort of your living room in most cases.

A few good alternate instant read options in the same price range are the DILISS Instant Read Meat Thermometer or the ThermoPro TP03A Digital Food Cooking Thermometer.  Both offer similar features with above average results.  If you want to check out my #1 rated recommended instant read thermometer check out the Lavatools Javelin PRO Duo review here.  You won’t be sorry you took a look.

Speed, accuracy, and the awesome hold function are the biggest pros to purchasing the GDEALER Thermometer.  The company’s customer service and an excellent warranty of the thermometer are also things that to be added to the pros list.

The downside here isn’t that it is a bad thermometer, but it’s just not as high-end as some of the more expensive thermometers.  But really this shouldn’t come as a huge surprise for its price range.  It certainly shouldn’t factor into the overall performance of this thermometer.

This GDEALER instant read thermometer comes in around $14 and it comes with a 100% Money Back and Lifetime Guarantee.  Not bad for a tool that will get a lot of action in any griller or cooks backyards or kitchens. 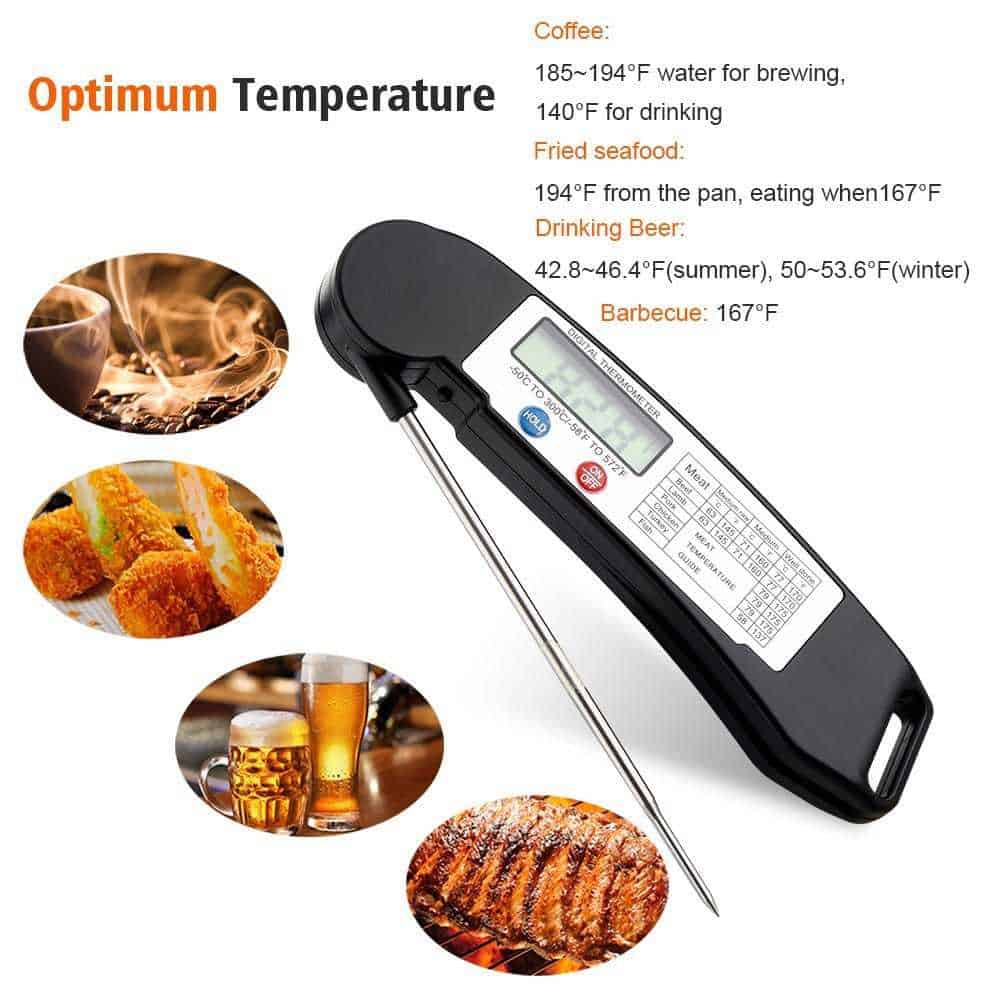 While the GDEALER is pretty darn solid for its price, there definitely are higher quality products on the market that offer higher-end features.  Of course, these products start to increase in price quite dramatically.  Still, the GDEALER has some nice features that just aren’t offered by many thermometers in this price range.

The GDEALERS instant read thermometer has a lot to offer and won’t empty your wallet.  That alone makes it worth looking into.

Buy The Alpha Grillers Thermometer Here
I hope this GDEALERS Instant Read Thermometer review was helpful for you.  As always, if you or someone you know is interested in grilling thermometers or you find this information useful, please consider sharing it with your grilling friends and on social media!

If you would like to leave a comment or have a review of your own to share on the GDEALERS thermometer, please do so below. We always welcome your input.