Meat Temperatures Doneness, How to Tell Without Overcooking 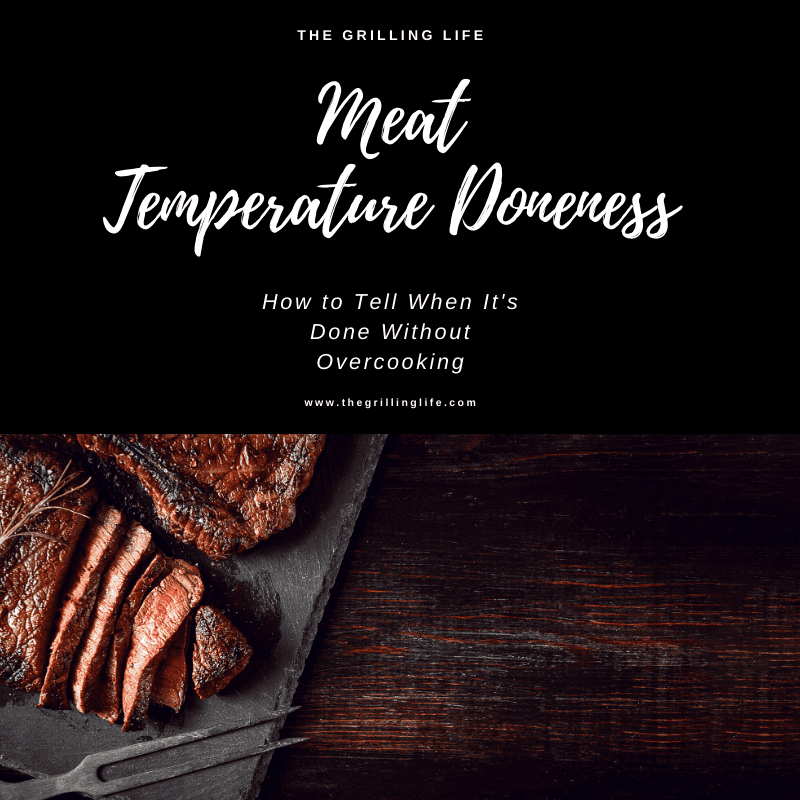 Today I want to talk about Meat Temperatures Doneness and how to tell when your meat is done without under or overcooking it.

But first, I have a little story to share.

I hate to admit it but I had another “DOH” moment the other night while grilling chicken breasts for the family.

Things couldn’t have started out better. I had four beautifully plump pieces of chicken, applied one of my favorite poultry rubs, seared both sides to perfection and removed them from the fire to finish cooking with indirect heat.

So what’s the problem?

Well first, we had a spider sighting in the house and anyone with a 4-year-old daughter will be able to tell you, this qualifies as an emergency.

After capturing and setting the spider free in the neighbor’s bushes (yeah I did that) one of the dogs got out. Good old Turbo can run like the wind, trust me, his name fits him perfectly. I was lucky enough to gather him up quickly and get him safely back inside.

Two quick games of hide and seek later with my daughter in the backyard, and the “DOH” moment hit me. I forgot to check the internal temperature of the chicken, and by the time I did, I realized I needed to run back to the house to grab a plate which cost me even more of a delay.

If I had been using my Bluetooth digital meat probe that connects directly to my smartphone with an app, I wouldn’t have had this problem. I could have been monitoring the meat from anywhere in the house or backyard and been warned when the chicken was about to be done.

Instead, my family politely smiled when I asked “how is your chicken?” and dutifully ate it despite it being overdone and dry without complaint. I’m a lucky man to have such troopers.

Life happens to everyone and this definitely won’t be the last time it happens to me.

I’ve ruined many a cookout in my younger days by not being able to tell the meat temperatures doneness and not knowing when it was ready to take off the grill. I have been able to master it with practice and being prepared and now hope to pass on what I have learned so nobody has to eat overcooked, dried out meat again.

I have really wanted to write about this topic for a while now for two reasons. The first being that even if you spend the extra money on the best cut of meat, season it to perfection and sear it so it has the perfectly aged whiskey-colored surface, all your planning and preparations are for nothing if you overcook it.

The second reason is that of all the misleading information out there that makes it seem so simple to tell the doneness of your meat without using a thermometer. If you google this topic, you will see all kinds of websites talking about the finger method, the fist method or the face method to name a few.

That is great and all and I will go over each of these methods in a minute, but I am here to tell you unless you are a seasoned chef who is cooking many steaks a night at a high-end restaurant, these methods are never as easy as they make them out to be.

Here are the problems with these touch methods. Nobody ever talks about the fact that everybody’s skin and body structures are different. Nobody’s hands or face are the same. What feels like medium to one person may feel like medium rare to another. I know. I have tested this out with many a friend standing side by side over the grill and rarely have we agreed on the doneness of the meat we were cooking.

That’s not to say that with enough practice you can’t learn to get pretty good at telling the doneness of your meat, but it will never be as reliable as the trusty thermometer. But if you want to try your hand at looking like a pro in front of your friends, then read on for ways to know when your meat is cooked and for my recommended method; the ever faithful meat thermometer.

First off, every piece of meat will cook differently depending on several factors. These would include meat thickness, water content and how hot the grill is. Rarer meat is softer to the feel and gets firmer the more it is cooked. The key is knowing when it is safely cooked but at the same time, not over doing it.

When using a meat thermometer to check for doneness, always insert the probe through the side of the steak to its center of the thickest part of the meat making sure you 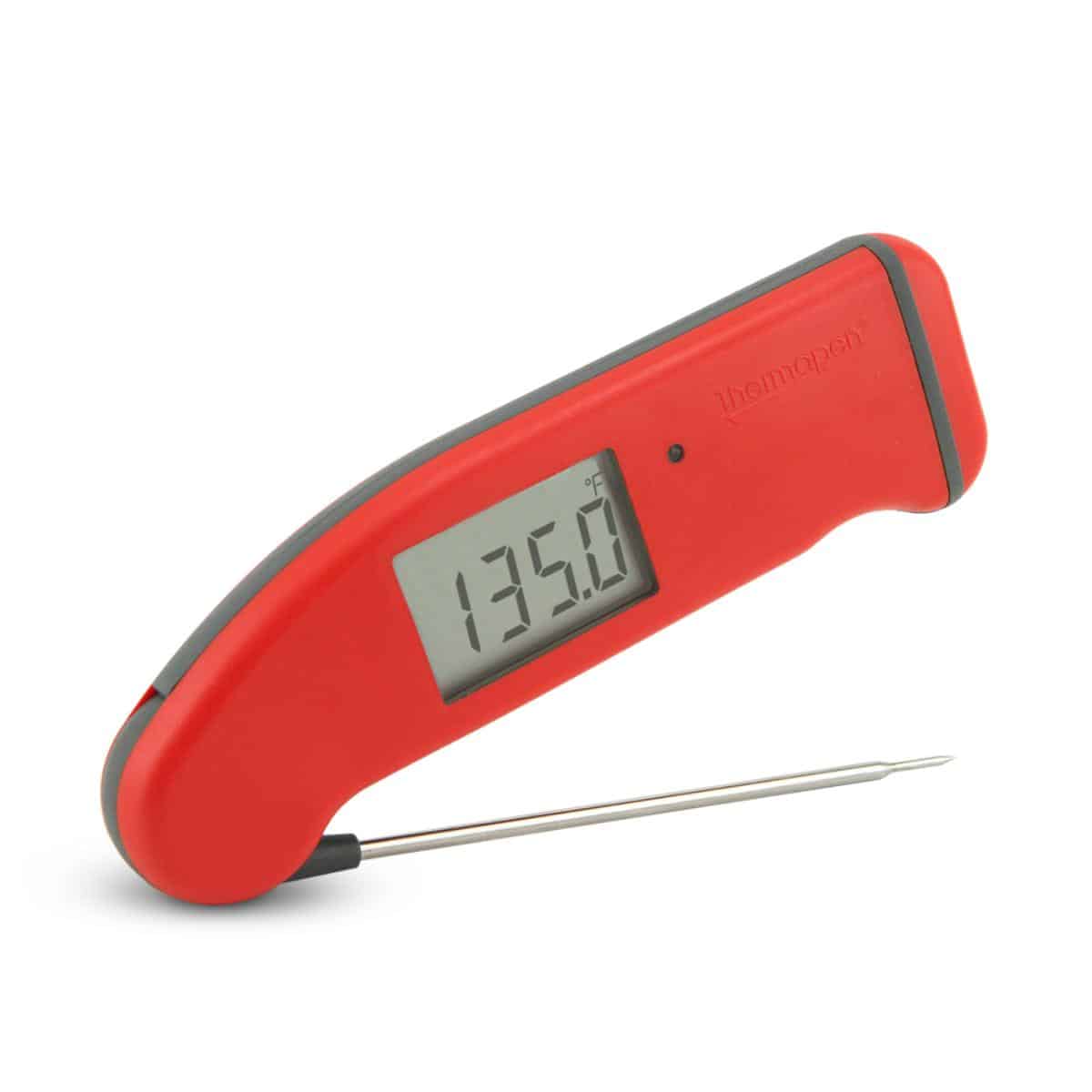 are not touching any bone. The bone will cause a higher false reading every time. I want to point out again that the only way to really know for sure if your meat is cooked to the desired doneness is to use a thermometer. I highly recommend a fast read digital meat thermometer.

With your palm opened and relaxed, use the index finger of your other hand to push on the fleshy area between the thumb and base of the palm. This is similar to what raw meat would feel like.

Now softly press the tip of your index finger to the tip of your thumb. There should still be plenty of give to the fleshy area below the thumb. This is similar to what rare meat would feel like.

Start by making a relaxed fist. Using your other hand’s index finger, feel the fleshy area of your hand between your thumb and index finger. This is similar to what raw meat would feel like.

Next, slightly clench your fist. It should feel a little firmer. This is similar to what medium meat would feel like.

Lastly, clench your fist tightly. This is similar to what well-done meat would feel like.

Start by relaxing your face. Next, touch your finger to your cheek. This is similar to what raw meat would feel like.

Next, touch your chin area. There should still be some give but be firmer than the cheek. This is similar to what medium meat would feel like.

Lastly, touch your forehead. This is similar to what well-done meat would feel like.

The last three are all examples of the touch tests. The next time you plan on grilling a steak, try practicing by pressing on the meat while it is cooking and check the reading with a thermometer. Remember how it felt at each temperature. With enough practice, you will be better able to judge the doneness by using the touch tests.

The final thing to be aware of when checking for doneness is to take into account the rest period after you remove the meat from the grill. Your meat will continue to cook for a while after being removed from the fire because of internal heat.

The temperature can go up an additional 5 to 10 degrees after it has been removed from the grill and before you are ready to eat. I always remove the meat I am cooking at about 10 degrees lower than the doneness I want. This too may take a little trial and error but the 5-degree rule generally works.

That is all I have for today. If anybody else has a useful method I missed, or a fun and creative idea they would like to share, please do so in the comments.

I hope this information was helpful to you and you are one step closer to joining me in “The Grilling Life”!