The pros, the cons, and the facts about the Traeger Lil Tex Elite Wood Pellet Grill and Smoker.

Come, my fellow BBQ aficionados, and let me tell you a story about a magical grill: the Traeger Lil Tex Elite.  Don’t let the cute name fool you—but do let it tickle you—because it brings the heat.  In the interest of full disclosure, I have to admit that you can easily find larger grills for less money.  I also have to tell you that, over time, Traeger Grills’ Lil Tex model saves money, plus it leaves a smaller carbon footprint than many of its pellet-burning competitors.

The Lil Tex isn’t without its issues, but for the most part, it’s a dependable dynamo that can slow-smoke or crisply sear your proteins.  Incidentally, it can also bake, braise, or roast your meat.  But you know that if you’re already familiar with pellet grills in general and the Traeger brand in particular.  If not, head on over to What is a Pellet Grill? – An Introduction to Pellet Grilling to get familiar with cooking with Pellet Grills.

This wee beaut also offers precise temperature control, along with a whole host of other benefits worth taking a closer look at.  I don’t think I’ll need to convince you to consider the Lil Tex, but it doesn’t hurt to try.

Made By: Traeger Grills

One of the biggest advantages of the Traeger Grill Lil Tex is hands down its eco-friendliness (which equals cost-friendliness, as you will see).  Grilling is somewhat divisive anyway.  Everyone has an opinion on the cleanest burning fuel and how particular models affect the environment.  Fair enough. 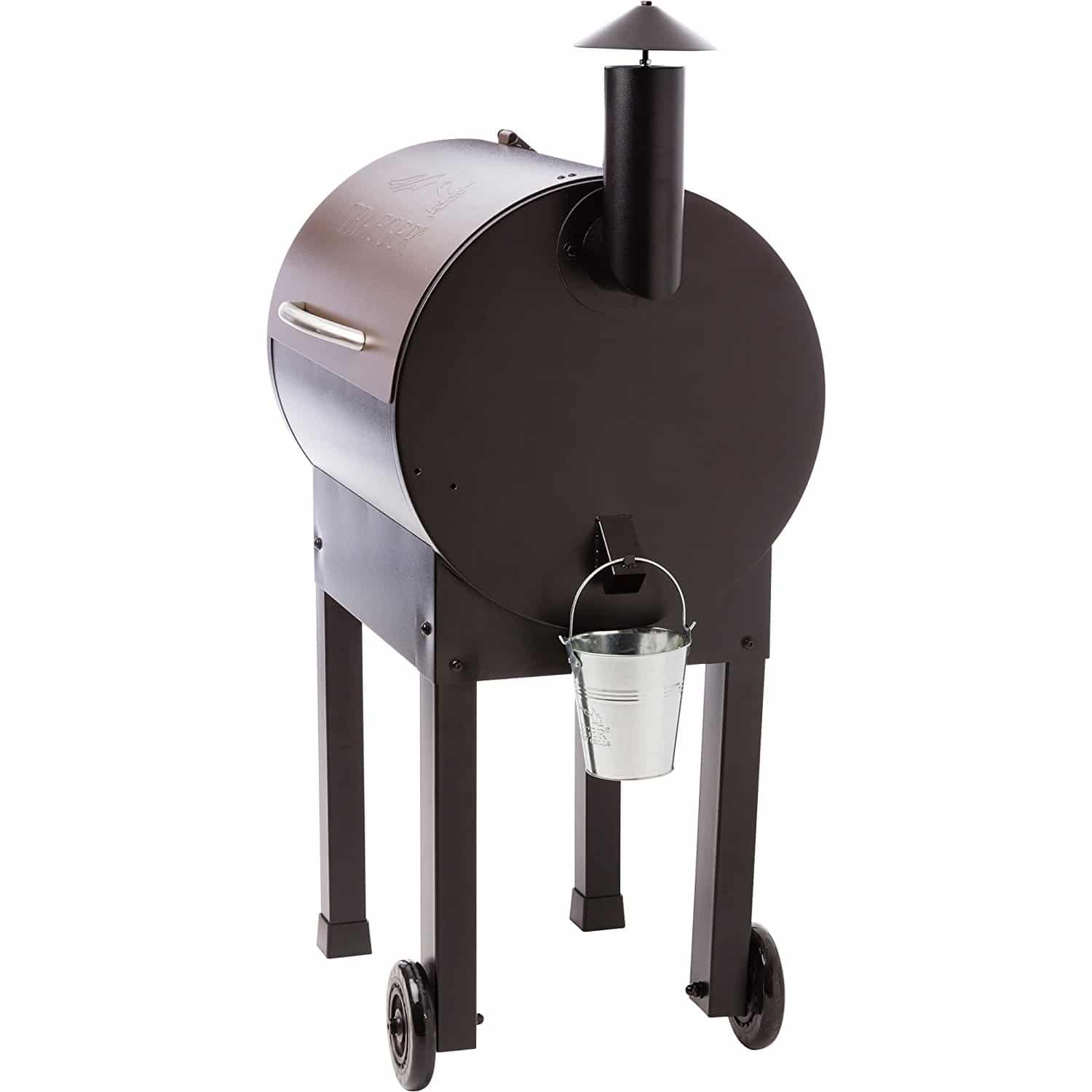 This grill, however, is a slow-burner—and not just when you’re smoking meats.  Take the long view and the Traeger Grills Lil Tex Elite is one of the most cost-effective wood pellet grills you’ll find.  Rather than burning through the pellets quickly, which is the biggest sin committed by the majority of its competitors, the Lil Tex Elite burns them more efficiently.

Quickly burning pellets are a big reason that some smoke masters get turned off of pellet models in the first place with pellet fuel being more expensive in general than propane or charcoal.  When it feels like you’re spending all your money on fuel, smoky flavor loses its luster in no time.

In contrast, the Traeger Lil Tex Elite employs a steadier system.  There’s substantially less waste involved.  For instance, set at high heat, the Lil Tex only goes through 2 pounds of pellets an hour—and it has an 18-pound capacity hopper.  At medium heat, it only burns through a pound an hour, and at low heat, it uses half a pound of pellets per hour.  Efficiency at it’s finest folks.

The fact that it runs off of a 110 voltage outlet speaks well for its efficiency, as well.  It’s not a power-sucker, which is a selling point for many of us.  That’s a cool feature, but I’m still more impressed by the way the grill treats its fuel source and still manages to bring the heat.

User-Friendly Controls And Simple To Use Features

Another point in favor of the Traeger Lil Tex Elite Grill is that it’s basically foolproof.  Your kid could use this grill.  You could teach your cat to man the burgers.  Don’t.  Don’t do either of those things.  Simply take comfort in the fact that this grill is as about as simple to use as it gets.

Bad (and oft-repeated) jokes aside, I’m referring to the Lil Tex’s automatic start system and simple to use dial controls.  I don’t want to get too far ahead of myself before detailing exactly how to use them, but auto-starts are helpful.  There are fewer chances to screw up or make a mistake. 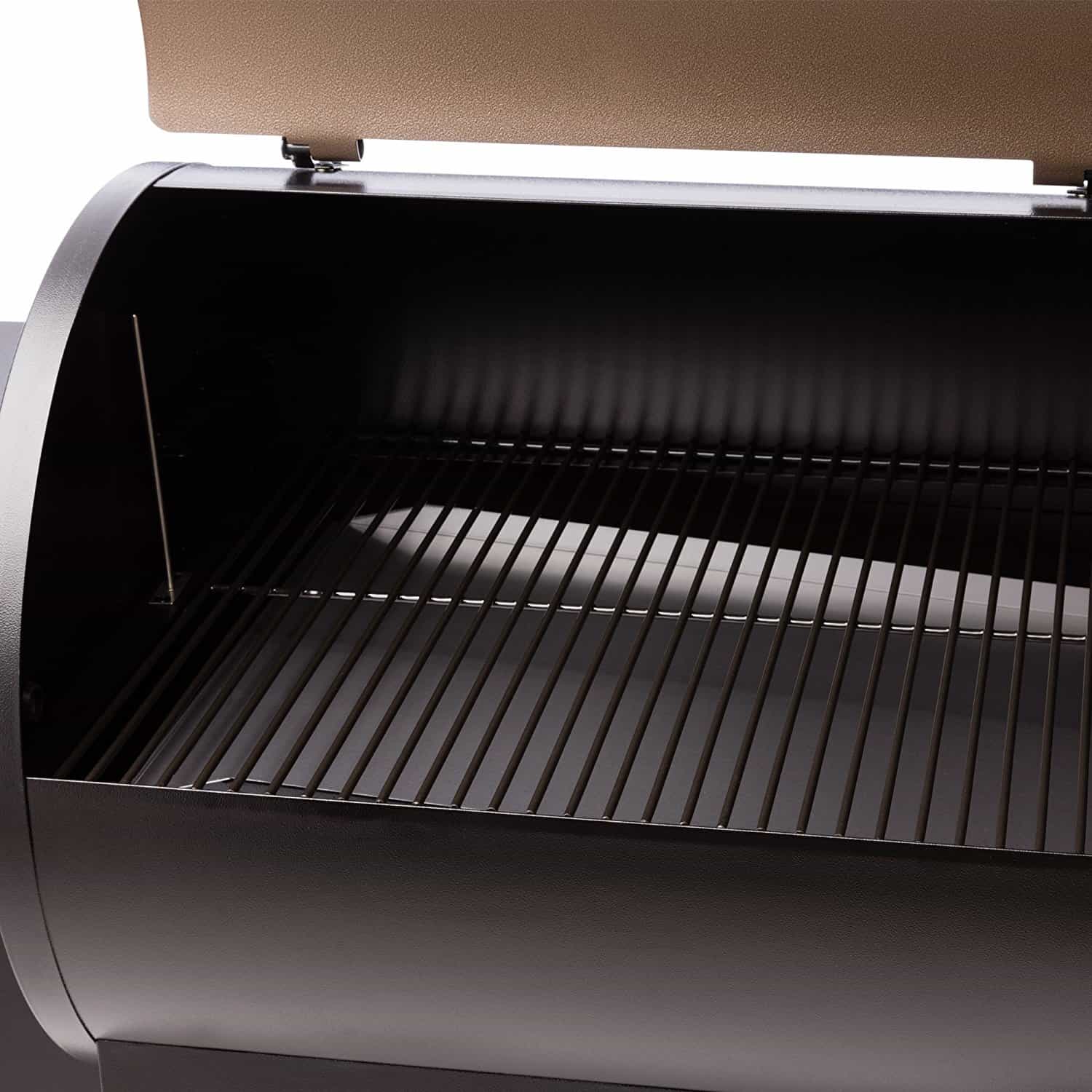 As I mentioned, you won’t have any issues with figuring out how to use the Traeger Grill Lil Tex Elite.  To that end, it’s an excellent pick for anyone who isn’t familiar with pellet grilling and smoking.

First off, fill up the auger with your choice of flavored wood pellets.  Next, flip on the grill and set your temperature with Traeger’s flawless controller (more on that in just a minute, too).  At that point, the auger automatically feeds the pellets into the Lil Tex’s firepot and the draft induction fan kicks on to feed air—and much-needed oxygen—into the pot.

At the same time, the igniter rod gets instantly activated.  Four minutes after you turn on the grill, that rod glows, ramping up to red-hot temperatures.  Ultimately, the rod ignites your pellets, which burn at a rate designed to stick to the set temp you selected as close as possible.

I’m going to jump right into this.  The Traeger Grills Lil Tex Elite has a number of features capable of convincing grillers who are on the fence that it’s the perfect pick.  Is it right for you, too?

Let’s talk temperature!  The Traeger Lil Tex Elite is capable of maintaining temperatures as low as 180 degrees Fahrenheit and as high as 450 degrees Fahrenheit, a level that’s only adequate for searing.  You set the degrees using the Lil Tex’s Digital Elite controller.  The panel is conveniently located, and it displays the temperature in can’t-miss orange.

There’s also a detector probe meant for checking resistance temperature.  Whatever your preset temp, this probe guarantees that the actual temperatures inside the grill remain within +/- 15-20 degrees.  That’s honest.  It’s maybe not the greatest margin for error, but it is pretty standard for a pellet grill in this price range.  Besides that, with a little practice, you’ll get to a point where preset and real temp are easy to manage and nearly dead-on.

Almost every pellet grill can double as a convection oven, so that’s not a surprise.  The Traeger Lil Tex Pellet Grill is different because of that slow-burn.  The airflow inside of the BBQ allows for gradual, gentle cooking.  Not only can you bake a pizza, but you don’t even have to turn your meat for it to get an even, juicy cook.  The even airflow surrounds the food for an even cook.

Hands up if you detest dealing with grease bins and drip pans.  It’s a messy job.  Grill masters just have to deal with it as a downside of their passion—but not so much with the Traeger Lil Tex Elite.  It features an effortless drain management system for getting rid of the grease.  The system draws out grease and any other liquids then deposits them into a bucket located on the side of the grill.

The Lil Tex features a no hassle Electric Auto-Start ignition that will have you up and grilling in no time with the simple push of a button.  No more having to deal with lighters, chimney starters or fire starters with this grill. 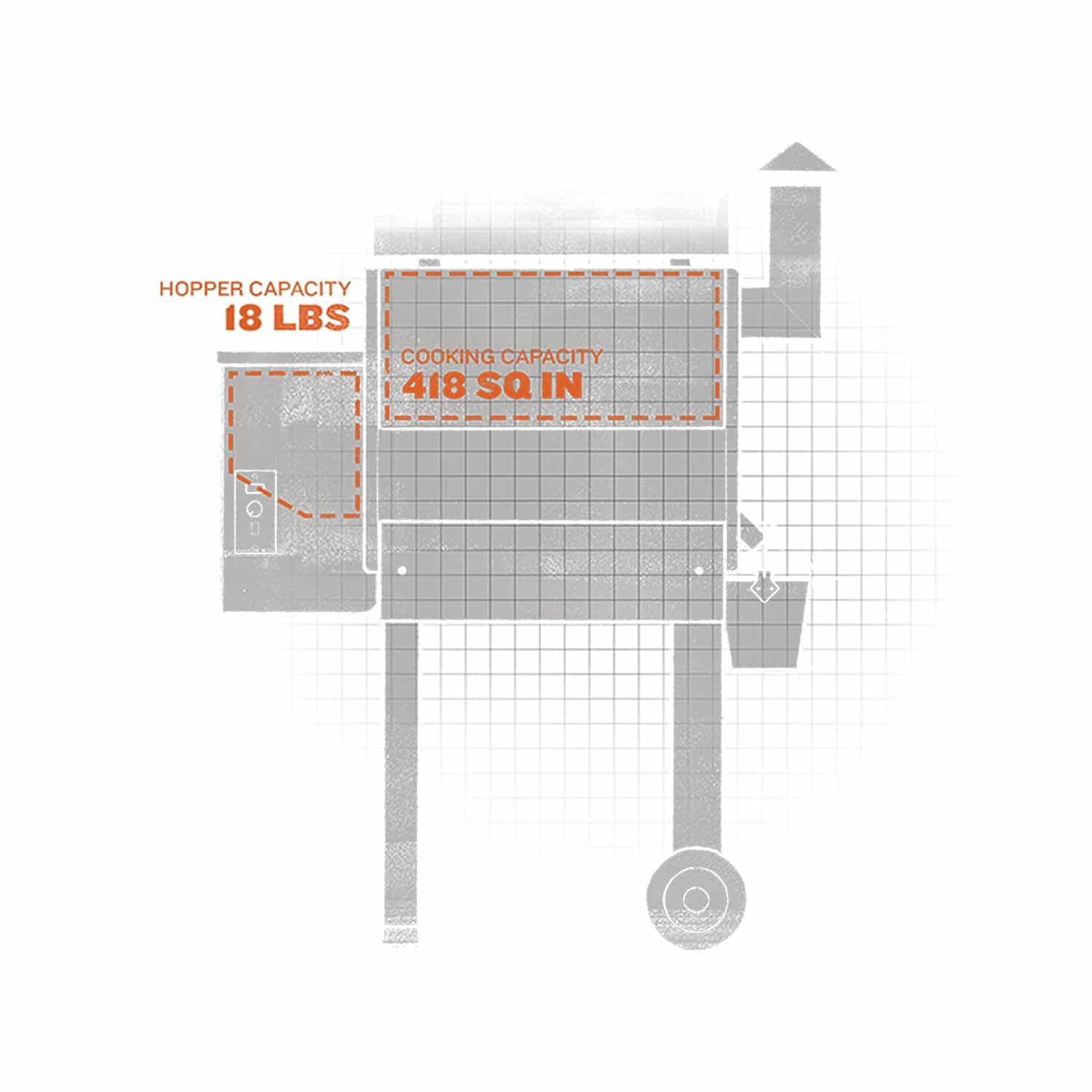 Who Was The Traeger Grill Lil Tex Made For?

This grill is for nearly anyone, particular smoking newbies, eco-conscious grillers, budget-conscious cooks, and people who crave a smoky flavor.  Because it’s so easy to use, everyone’s capable of running the Traeger Lil Tex Pellet Grill.  This a great option as an affordably priced, entry-level pellet grill from the biggest name in the pellet cooking industry.

While 20,000 BTUs are nothing to sneeze at, you might prefer a more powerful grill than the Traeger Lil Tex Elite.  You shouldn’t get it if you want a behemoth BBQ, either.  The Lil Tex is plenty big, but you might need something more than 418 square inches.  It does the job it is meant to do and does it well for an entry-level pellet grill, but if you want advanced features and better heat control, you are going to have to pay for it.

An alternative option to check out is the Camp Chef Woodwind Pellet Grill.  This has many of the same features but with some useful extras and is worth a look.  Click on the blue link for a full review.

The price of the Traeger Grills Lil Tex Elite is pretty much the same across the board: $699.99. Keep an eye out and you might find it on sale, though.  In addition to stellar customer service, Traeger provides protection against any defects in the materials used or the workmanship for 3 years after you purchase it. The company also replaces defective parts, although you’re responsible for shipping. 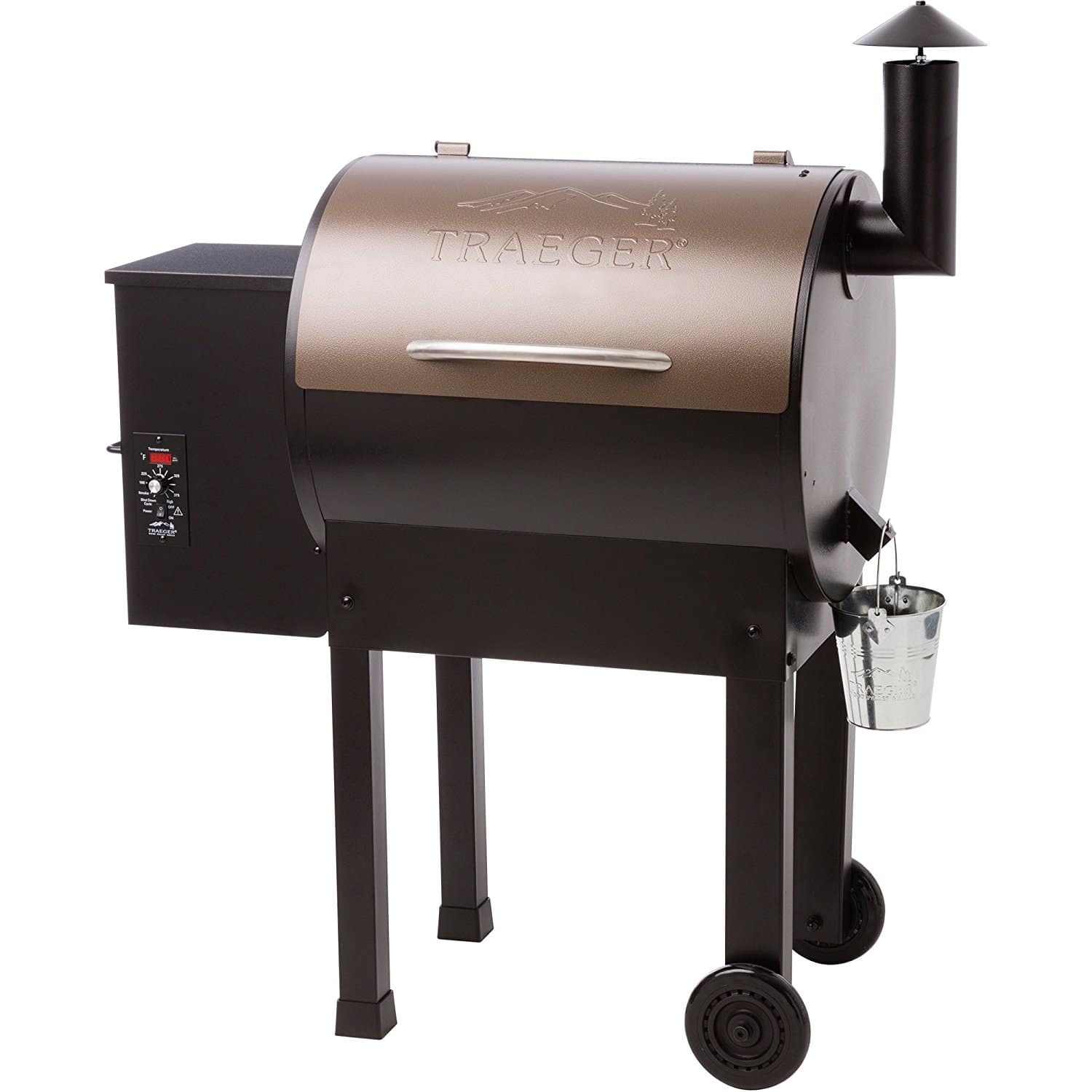 Check The Current Price Of Traeger Lil Tex Elite 22 Pellet Grill Here
See My Picks For The 10 Best Wood Pellet Grills With Reviews And Buyers Guide Here
I hope this Traeger Lil Tex Elite 22 Wood Pellet Grill Review proves helpful for you.  As always, if you or someone you know is interested in venturing into the world of pellet grilling; please consider sharing with your friends or on social media.  I appreciate your support!

Have you used this grill?  Do you have something to add?  Leave your review in the comments!  We always welcome your input and I would love to hear about your experiences with it.

At The Grilling Life, I am committed to researching and writing thoughtful, informative and editorially independent reviews of the best products for your outdoor cooking needs.  If you like what I do, you can support me through my chosen links, which earn me a commission.  This allows me to continue sharing with you my love for all things barbecue.  Your support is truly appreciated.